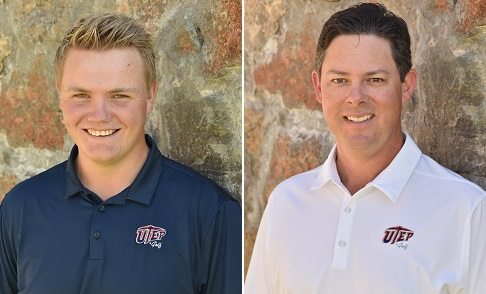 At the conclusion of round one, the UTEP men’s golf team leads the field after firing a 12-under-par 276 at the Price’s “Give ‘Em Five” Invitational on Friday.
Not far behind is NM State, trailing the Miners by four strokes with a round of 280. UTSA finished the round in third place, shooting 282 and Marquette is right at the Roadrunners’ heels with 283. Round two of the Miners’ only home tournament will begin tomorrow at 8 a.m. (MT) at the Butterfield Trail Golf Club.
“There are a lot of good teams here,” head coach Scott Lieberwirth said. “I’m not concerned with what the other teams are doing, I think we have to concern ourselves with our games and how we play the golf course. If we do a good job of that, we execute the way we know how, we’ll be fine.”
Three Miners finished the round in the top five, and five finished the day in the top 20.
Tied at the top of the leaderboard are Miner sophomore Andreas Sorensen and UTSA’s Zander Lozano, who each shot a six-under-par 66. Sorensen had eight of the team’s total 23 birdies, leading the field. Prescott Mann, a redshirt junior playing as an individual for the Miners, sits in a close third place position after shooting a five-under-par 67, tacking an eagle on his card.
One stroke behind in fourth place is teammate Charles Corner (four-under-par 68). In a five-way tie for fifth place is NM State’s Luis Medina and Isaac Merry, Seton Hall’s Lloyd Jefferson Go, Texas State’s Logan Lockwood and Marquette’s Matt Bachmann, each shooting three-under-par 69.
“Andreas did a great job, he’s done very well on this golf course and he had a good tournament here last year so I was pleased with him and his leadership today,” Lieberwirth said. “Charlie [Corner], as well, had a very solid round and Prescott played well, he had a very good day and does tend to play this course fairly well, and I hope he continues his good play. ‘
Nicklas Pihl and Ben Getman are both tied for 18th after firing a one-under-par 71, and Chad Ahn, another Miner individual, is tied for 24th, shooting an even-par 72. Individual player Evan Macias came in next for UTEP in a tie for 43rd after shooting a three-over-par 75.
Frederik Dreier and Miner individuals Cole Donielson, Eduardo Gonzalez, and Settavut Paradee are tied for 48th after shooting a four-over-par 76.
“There always are a little bit of nerves and I think it may have gotten a couple of our guys today,” Lieberwirth said. “Maybe they over-thought things or maybe their minds weren’t as clear as they could have been. That usually wears off after day one, by day two they’re focused and we have a couple of guys that want to get a little bit of revenge on this course tomorrow.
“Freddy [Dreier] had a bad day, we all have bad days, and unfortunately when the lights were on, he had a poor day. But I’ve got all the faith in him, he’s going to come back and have a great day tomorrow.”
The Miners are trying to win their home tourney for the first time.
“Top to bottom it [play today] wasn’t as solid as we’ve been in other points this fall,” Lieberwirth said. “Andy [Sorensen] had a great day, which he’s fully capable of, Freddy [Dreier] will bounce back tomorrow, he didn’t have his best today, but every one of our guys in the starting five are capable of shooting great scores out here so I think it’s just a matter of us relaxing. These are our friendly confines here at home, so just relax, go play and have fun and I think things will turn around.
The Miners will begin to tee off at 8:50 a.m. tomorrow for round two at the Butterfield Trail Golf Club. The third and final round will begin Sunday at 8:15 a.m. in a shotgun start.
“Whatever the result is, is what the result is,” Lieberwirth said. “But it’s a matter of the process, it’s a matter of executing shots that we need to hit so aside from that, honestly, I’m not looking at the leaderboard that much. If we play quality golf, I think we’ll be fine.”
Live scoring will be available at golfstat.com
Tags: utep golf