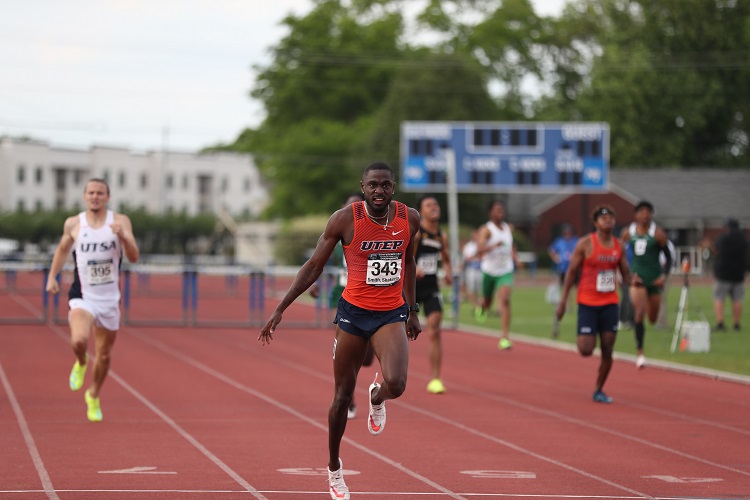 MURFREESBORO, Tn. – The UTEP men’s 4x400m relay team capped the weekend with a victory that surged the Miners to a second-place finish at the 2021 Conference USA Outdoor Track and Field Championships on Sunday at the Dean A. Hayes Track and Soccer Stadium.

The Miners beat out host Middle Tennessee, 126 points to 121 after the two men’s squads were tied heading into the final event of the day. The heavily-stacked Charlotte men’s team ran away with the C-USA title with 169 points. Middle Tennessee captured the women’s championship with 150 points. The young UTEP women’s squad scored 47 points – all on Sunday – and finished in eighth place.

Overall, UTEP medaled in 13 events, while capturing gold in seven of them. The Miners also earned four silver medals and a three bronze medals.

“We are extremely proud of the efforts our young teams demonstrated at the conference championship meet,” UTEP Head Coach Mika Laaksonen said. “Obviously not at all a perfect day as they are at these championships, but we fought hard and had several outstanding performances as a result.”

Paulo Benavides opened the final day of competition with a gold medal in the pole vault. The El Paso product cleared his final attempt, jumping over the bar a season-best 5.36m (17-7).

“Local Franklin High School graduates Paulo Benavides and Benjamin Coronado also stood out,” Laaksonen said. “Paulo gained back his old winning form by winning the men’s pole vault and Ben deserves an honorable mention for battling hard during the last three days for us, while scoring points in all three events that he participated in.”

A pair of seniors – Shakeem Smith and Sean Bailey – competed in their final conference championships and went out with a bang.

Smith took home a trio of gold medals. Smith won the 110m hurdles, clocking in a personal-best 13.73, and shattering his previous best of 13.91. Smith also won the 400m hurdles, hitting another personal-best time with a 49.82. The Nassau, Bahamas, product broke the meet’s 21-year old record, previously held by Houston’s Greg Christie (50.05 on May 13, 2000). Smith was also part of the 4x100m relay team that captured gold.

Jevaughn Powell, who competed in his first conference meet and won two gold medals, raced out to a first-place finish in the 200m, clocking in a time of 20.75.

Smith, Powell, Bailey and Dennis Johnson clocked in a season-best time of 40.03 to claim gold in the 4x100m relay.

“High praise to Shakeem, Sean and Jevaughn for their fantastic performances as they helped the men’s team win six events today,” Laaksonen added.

Freshman Denae McFarlane impressed in her first season with the Miners. The Clarendon, Jamaica, product won a pair of silver medals, while setting her personal-best times. McFarlane started her day with a second-place finish in the 100m with a time of 11.52. Her previous best was 11.81. She followed with another second-place showing in the 200m with a personal-best 24.02, and beating her previous mark of 24.47.

“On the women’s side, we had to settle for a few second-place finishes,” Laaksonen said. “Two by our new freshman sprinter Denae McFarlane, one by our javelin thrower Roosa Yloenen, and another by our 800m runner Carolyne Chepkosgei, who’s had quite a busy day finishing with points in the women’s 1500m run, and anchoring our women’s mile relay for us.”

Heading into the final event of the day, UTEP and Middle Tennessee were tied in second place with 116 points. Joshua Hill, Ned Azemia, Kevin Hewitt and Bailey clocked in a 3:08.19 to tally 10 points. Host MT finished in fourth, gaining five points.

“What also pleases us is to get second in the men’s championship race as a team, a big improvement from the last championship,” Laaksonen said. “Charlotte was unfortunately a bit too tough of a team for us to beat. This championship definitely also exposed our recruiting model a big. Things change, and as a result, we will definitely weigh our future scholarship allotment differently to be more competitive.”

Up next, UTEP will send multiple student-athletes to the 2021 NCAA Outdoor Track and Field Regional Championships on May 27-29 in College Station, Texas, at E.B. Cushing Stadium.

The NCAA Outdoor National Championships will be held on June 9-12 in Eugene, Ore., at the newly renovated Hayward Field.