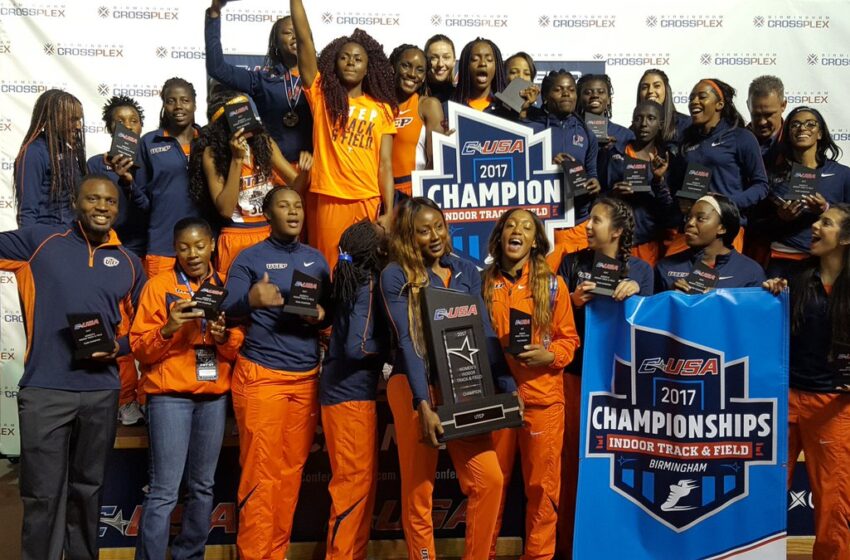 BIRMINGHAM, Ala. – UTEP’s women track and field team completed the three-peat capturing the Conference USA title, after a close battle with Rice at the Crossplex Center.

The Miners finished with 113 points, while Rice totaled 110 points.

“It’s very special. We followed our plan and the girls performed at their best,” head coach Mika Laaksonen said. “The senior class really deserved this and they worked really hard. It’ll be tough to replace them next year.

Laaksonen was awarded C-USA Coach of the Year.

Tobi Amusan led the way scoring 25 team points. The sophomore ran a meet record in the 60m hurdles with a time of 8.01 notching 10 team points. Amusan captured gold in the 200m posting a time of 23.35 adding another 10 points. The sprinter placed fourth in the long jump on Saturday to earn five points.

Amusan was named the High Point Scorer of the Meet.

Teammate Rebecca Oshinbanjo captured bronze with a time of 8.70 in the 60m hurdles.

Senior Florence Uwakwe garnered 10 team points in three events. In the 60 meters (7.57) she earned a sixth-place showing for three points and fourth place in the 200m (23.94) for five points. Uwakwe ran the second leg in the 4x400m relay  (3:39.87), which helped capture the conference title with six points.

Heading into the final event, UTEP and Rice were tied at 105 points each. The Miners 4x400m relay of Dreshanae Rolle, Uwakwe, Imani Adams and Ada Benjamin were placed in the third and final heat. Rice went in the first heat with a time of 3:48.06.  After a shaky handoff between Rolle and Uwakwe the team recovered pushing through to finish second overall.

On men’s side, the team finished fifth overall with a total of 74 points.

Michael Saruni and Jonah Koech won gold and bronze in the mile run. Saruni trailed most of the way and used a last minute kick to finish with a time of 4:03.32. Koech paced the entire race in front running 4:04.93. Saruni returned in the 800m (1:50.47) earning his second gold medal and scored a total of 20 points in two events.

NCAA Indoor Track & Field Championships will be held in College Station, Texas, on March 10-11. Student-athletes now await the final national performance lists next week to see who will qualify for the annual NCAA event.