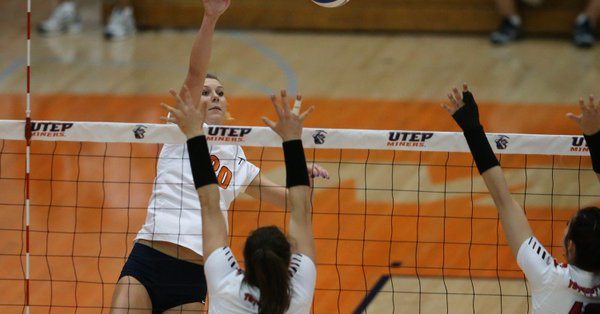 The UTEP volleyball team dominated Delaware State, sweeping the Hornets 3-0 in the Miners’ second match of their own Borderland Invitational tournament on Saturday.

In front of more than 150 fans in Memorial Gym, UTEP took the matches 25-10, 25-15 and 25-9 to earn its third win and first sweep of the season. The Miners will look to remain flawless on the weekend when they take on Abilene Christian on Sunday at noon in Memorial Gym to close out the Invitational.

Pacing the pack was Maddie Morgan, who was a force for the Miners with nine kills in 14 attempts and no errors, hitting at a .643 clip while denying the Hornets’ attack with three solo blocks and three block assists. The junior added an ace and dig a piece as well.

“I didn’t get to play as much as I wanted to on Friday so I came into this game thinking I need to prove myself today,” Morgan said. “I wanted to focus on what coach [Watts] drills us on, which is serve and passing, and I really wanted to help my team win today. I think there was a moment when the whole team was communicating well and our rotations were great, which helped us get the win.”

Mallory Yost contributed in the effort as well, knocking down eight kills at a .438 clip while teaming up with Morgan for two block assists and picking up two digs. In two sets played, Macey Austin hammered 7 kills while notching a team-leading three service aces to earn herself some rest in set three.

“Three-seventy-three is amazing, whether there is a block on the team on the other side of the net or you’re just doing hitting lines so I think our team did a great job,” head coach Holly Watts said. “We tried to take care of every rally and we tried to push the tempo of the play, not regarding who was on the other side of the net. I felt like our serving and passing were really good so if we’re doing that at a high level, we put ourselves in control. You’ve got to play to finish, each play is important and you have to see it through.”

The Miners easily handled the first two sets, but their dominance was prevalent in set three when they did not allow the Hornets to get to double digit points in set three. The Miners jumped out to a 5-0 lead before Delaware was able to notch a kill to put them on the board.

The Miners would earn five more points before the Hornets scored again, bringing the score to 10-2. The Hornets would score again as the Miners reached 15 points, but their next points would only come from UTEP errors before Delaware State got a kill, but the score remained lopsided at 21-7.

Only one more kill by the Hornets and a Miner error would give them their final two points, as UTEP ran away with the set 25-9 and completed the sweep.

Every Miner got their chance in the rotation, with most of their starts getting rest after the first set.

“It was great to give everyone a chance to play today, it gave us an opportunity to do some different things with our lineup,” Watts said.

The Miners will return tomorrow for the Borderland finale, taking on Abilene Christian at noon. Live stats will be available HERE.