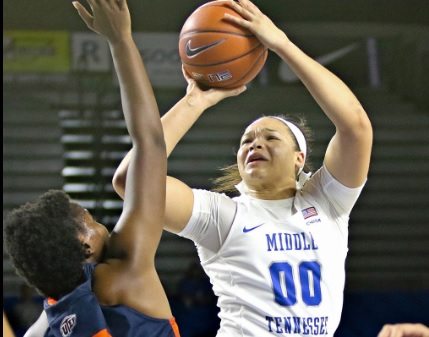 “Coach Insell does have quite an excellent program,” UTEP head coach Keitha Adams said. “He’s won 146 games and only lost 25 here at home. We competed and I’m proud of our team for battling and playing hard. Our inability to score in the first half really hurt us. We had too many turnovers in the first half. In the third quarter we got it within five but they responded back. There were some positive tonight but we’ve got to get better defensively. We also had a lot of shots around the basket that we just didn’t finish. Middle Tennessee is always good defensively and it was  challenge.”

The two sides traded scores in the opening moments, with Middle Tennessee up by two (8-6) halfway through the first quarter. The Blue Raiders, though, closed the frame on a 6-1 run to lead by seven (14-7) after the 1Q.

UTEP turned up the heat defensively at the onset of the third quarter, holding MT to just four points in the first six-and-a half minutes of the frame. The Miners also got the offense in gear, with baskets from numerous sources to spark a 7-0 run in the blink of an eye. MT had a response, though, in the form of the aforementioned 12-0 surge that finally gave the home side the breathing room it needed.

Even at that point UTEP didn’t fold up shop; it trimmed the deficit to 11 and a McKinney triple that would have cut it to eight rimmed out. The Blue Raiders controlled things down the stretch, pulling away for the 23-point win.