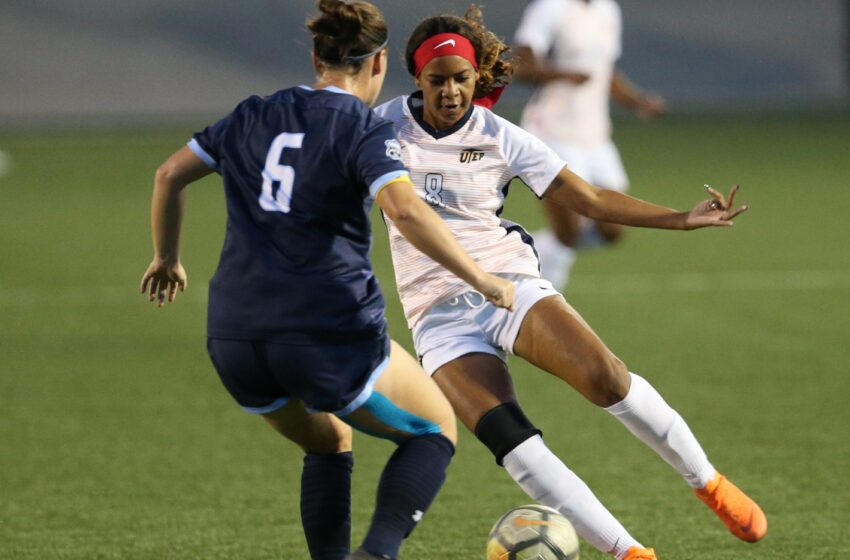 UTEP’s Anna Jimmerson (26’) and Lauren Crenshaw (44’) etched their names on the score sheet in a 2-2 draw against ODU on Sunday night.

ODU’s Natalie Johnson (5’) and Emily Roberts (79’) both netted a goal to keep the team’s hope of a playoff appearance alive.

“We came out and played aggressive against a very talented Old Dominion,” said UTEP soccer head coach Kevin Cross. “They [ODU] haven’t given up a goal in more than 500 minutes, so to get two against them really builds our confidence. Heading into next week is a tough game at UTSA, and we really want to end the season with win.”

Sophomore Caley Leask made her fourth consecutive start for the Miners in front of the goal. She posted eight saves on the nights.

The Monarchs jumped out to the early lead with a ball headed past Leask by Johnson in the opening five minutes of the game. ODU tallied 25 shots, adding six corner kicks. The Monarchs didn’t let up on the pressure, getting three consecutive shots following the goal but the Miners’ defense held true.

The Monarchs nearly doubled their lead with a shot from Iris Achterhof that was saved off of the line by midfielder April Pate in the 22nd minute.

Jimmerson knotted things up with a spectacular header on goal. She scored her fourth of the season off of a 20-yard pass from Cayla Payne into the box. UTEP kept the pressure up with four more shot attempts at goal before finding the breakthrough in the 44th minute. Crenshaw earned a free kick just outside of the penalty area and with a precise kick, netted her seventh goal on the year.

ODU applied high pressure to the Miners defense, having most of its shot attempts (14) come in the second half. The Monarchs leveled the score at two with a goal from Roberts on a pass played in from Achterhof.

Both teams battled through overtime, both getting three attempts at goal. UTEP had its best opportunity to finish the game when Crenshaw opened up the field on a counter attack but pushed the ball just wide of the net in the 108th minute.