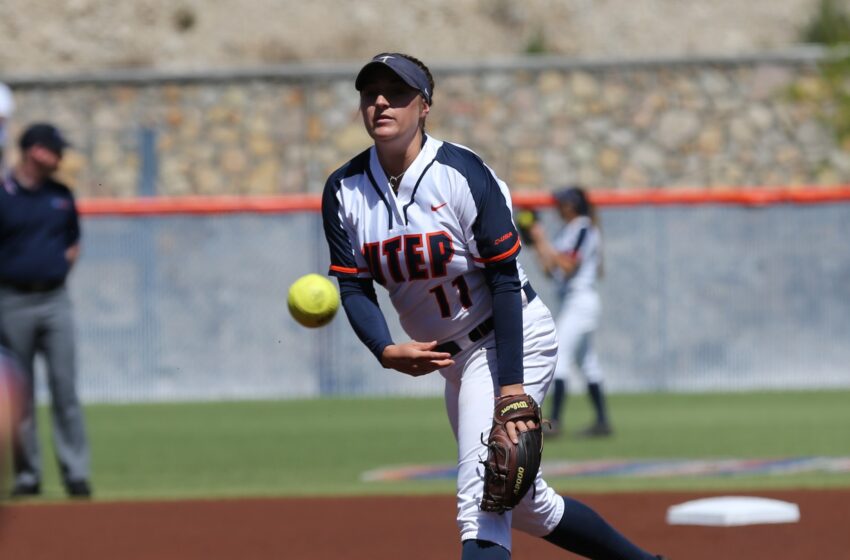 UTEP starting pitcher Julia Wright allowed only four hits and struck out six behind a complete-game effort as the Miners (18-26) shutout New Mexico (11-29), 7-0, on Monday afternoon at the Helen of Troy Softball Complex.

“[Julia Wright] did a great job, she only gave up four hits and had a no-hitter going into the fifth inning,” fifth-year UTEP head coach Tobin Echo-Hawk said. “She did a great job of getting ahead early in the counts and it work to her advantage.”

The Lobos, after being no-hit by UTEP on Feb. 17 in Las Vegas, Nev., finally chalked one up when Monica Salas singled with one out during the fifth inning.

Monday’s victory was the fourth straight for the Miners after sweeping Conference USA foe North Texas this past weekend, while their home record improves to 12-4. UTEP has already surpassed last season’s win total of 12.

UTEP went up 4-0 early as Kaitlin Ryder drove home Courtney Clayton in the first frame. Clayton had singled to get on base for her 236th career hit.

The Miners scored a trio of runs in the second as Ariana Valles registered a RBI when she singled to right center, plating Taylor Sargent. Valles would reach second on the throw. Then with two outs on the board, Clayton put the ball into play as UNM shortstop Cameryn O’Grady committed a throwing error and letting Valles and Pamala Baber score runs.

Clayton has now reached base 32 times on errors during her career, extending her school record.

After going scoreless three innings, the Miners put up three more in the sixth to make the score 7-0. Sophomore Bryanna Molina, on a pinch-hit opportunity, was hit by a pitch with bases loaded to earn a hard RBI – the first of her career. Linda Garcia and Ilena Santos each grounded out but were credited with an RBI each during their pinch-hit at bats.

Wright then took the circle for the top seventh and after allowing the leadoff hitter Chelsea Johnson to single, she struck out D’Andra DeFlora looking and Andrea Howard swinging for back-to-back K’s. Salas popped out to the Conference USA Player of the Week first baseman Kacey Duffield to end the contest.

Miners the were credited with eight hits, led by Sargent’s 2-for-2 outing, along with her second triple of the season and sixth of her career. Sargent now ranks tied for second with Sarah Ramirez on the program’s all-time list. Valles’s added a 2-for-3, one-run, one-RBI performance.

Sargent, who recorded the last out by throwing out a runner at home plate from right field during Sunday’s win over North Texas, threw out a runner at home during the fifth. Sydney Broderick singled to right with Salas at second base, but Sargent snagged the ball and made a direct throw to Ryder to end the top half.

“[Sargent] is just solid out there [in right field],” Echo-Hawk said. “She has a great arm and is one of our more accurate throwers. So, as long as she’s being aggressive, she’s gives us a good chance to get that out at home.”

UTEP will host Southeastern Conference program [RV] Ole Miss (21-18) April 20 and 21. Friday’s contest will begin at 7 p.m., while Saturday’s game is set for a 4 p.m. start at the Helen of Troy Softball Complex. The Rebels are playing Mississippi State on Monday night and are 4-13 in SEC play.