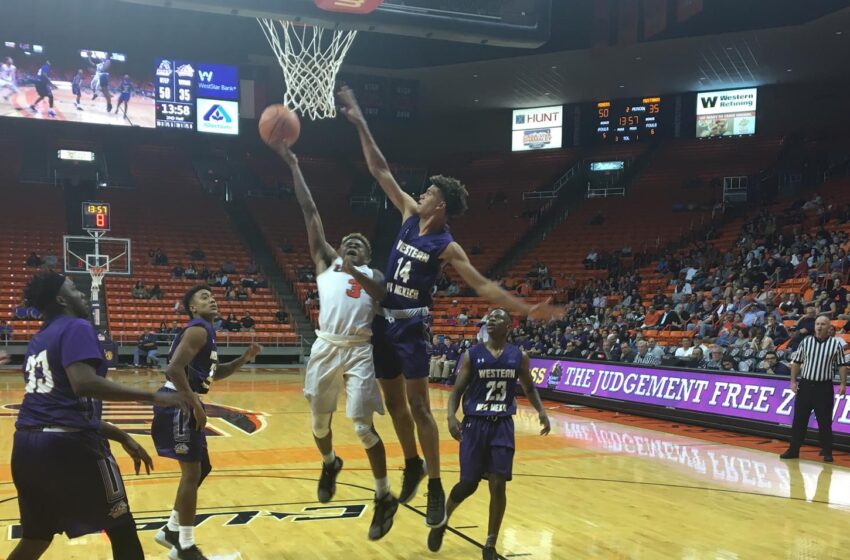 Keith Frazier scored 14 of his 17 points in the first half, as UTEP continued to tune-up for the 2017-18 season with a 98-50 exhibition victory over Western New Mexico on Friday night at the Don Haskins Center.

“We got a little better in some areas,” UTEP coach Tim Floyd said. “We were able to look at different combinations of players. The only regret in the game was that Tirus Smith again could not play very long [five minutes, five fouls]. We really wanted to see him with some quality minutes tonight and it just didn’t happen. We got an inside presence with Matt [Willms]. I thought we got him the ball when he was in there, which was good.”

Frazier was 5-for-7 from the field and 3-for-5 from three-point land in 14 first-half minutes for the Miners, who led 44-27 at the midway point. He also pulled down eight rebounds and added a couple of steals in the first half.

Frazier finished with a game-high 12 rebounds, and added two steals in 25 minutes. He made 6-of-9 shots and 4-of-7 three pointers.

“Keith really hadn’t played in almost two and a half years. He just gets a little better every single day,” Floyd said. “He just started practicing with us two and a half weeks ago. You can see some flashes of why he was a McDonald’s All-American. He can just get the ball in the basket. He’s going to help us there. We want to help him try to get back to the foul line and increase his productivity there. We want to help him by getting better defensively.”

Trey Wade scored 19 points, Willms had 15 points and seven rebounds, and Paul Thomas (12 points) and Isiah Osborne (11 points) also scored in double figures for UTEP. The Miners shot 68.8 percent in the second half and 56.7 percent on the night, while outrebounding the Division II Mustangs 47-35.

Wade scored 13 points in the second half, when he was 5-for-7 from the floor and 2-for-3 from beyond the arc.

“Trey got quality minutes,” Floyd said. “It’s obvious that’s he going to be able to score. I was impressed with the fact that he was so much better defensively in this ballgame, and so much better than he was in our intrasquad scrimmage. He’s a conscientious young man, he’s trying to do exactly what we want him to do and he can get the ball in the basket. He is going to be a very, very fine player.”

UTEP trailed just once in the game, 2-1, before scoring the next 12 points. Frazier scored eight of the Miners’ first 13.

After Western New Mexico closed to within 14 (41-27) on a three-pointer by Davis Wade, the Miners’ Omega Harris answered with a trifecta of his own right before the halftime buzzer.

The Miners didn’t need much from their star player, Omega Harris, who finished with seven points in 21 minutes and is nursing a bad back.

“I don’t know how bad it is but he’s a guy that can just play all day,” Floyd said. “It’s got me concerned. It tightened up on him again tonight. We held him out of about five practices. We started him on yoga with the hopes that maybe that will help a little bit. We’ve got to get productivity from that spot.”

The Miners will tip off the regular season at home versus Louisiana College on Friday, Nov. 10 at 7 p.m. UTEP Basketball Season Tickets are on sale now by calling (915) 747-6150.