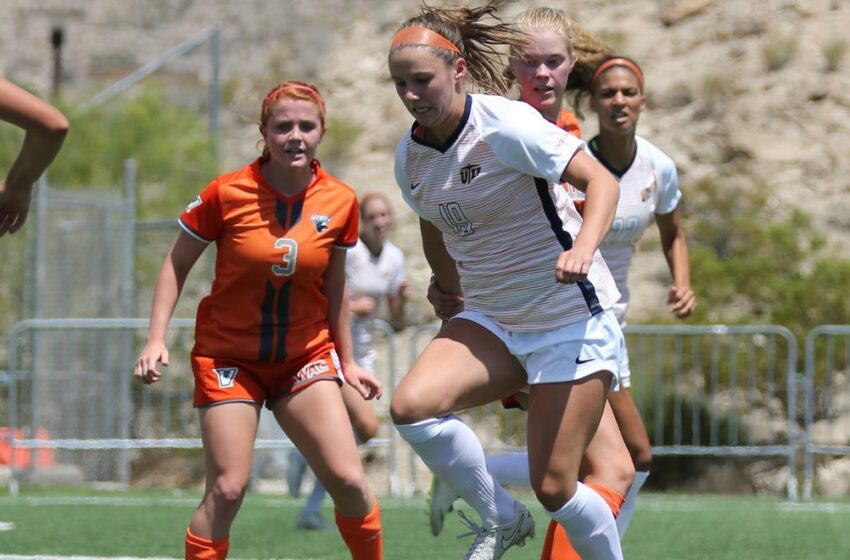 The UTEP soccer team will conclude its four-game homestand with matchups against Grand Canyon on Friday at 7 p.m. MT and on Sunday vs. Northern Illinois at 6 p.m.

“We are very excited to be playing at home this weekend with football also playing and Minerpalooza going on,” UTEP head coach Kevin Cross said.

“It should be a very exciting UTEP weekend! We start off on Friday night with Grand Canyon for Military Appreciation Night! UTEP Soccer is very appreciative of our Military and Fort Bliss. Grand Canyon is one of the best supported women’s soccer programs in the country. They are very well coached and have a very good attack. We need our fans to come out and support UTEP Soccer! On Sunday we get the opportunity of playing Northern Illinois, which also has a good program.”

UTEP will boast a “Military Appreciation Night” on Friday; all military personnel will receive $2 tickets. Sunday will showcase “Go Nuts For Donuts.” The first 150 fans in attendance will receive free donuts.

“We are working very hard this week to clean up our mistakes, and to get the squad playing its best soccer,” Cross said. “We can’t wait to get back out on the field on Friday night!”

Getting To Know GCU

GCU has started its season with an overall record of 1-3. The Lopes came up short in overtime against #21 Washington State (1-0, 8/19/18). GCU has returner McKenzie Cook, who led the team with five goals, five assists and 80 shots during the 2017 season. She has already registered 15 shots this year but has yet to put one in the back of the net. Goalkeeper Abby Burton has 28 saves and one shutout so far.

Getting to Know Northern Illinois

Northern Illinois first-year head coach Julie Colhoff has started the season with an overall 0-3 record. The Huskies have been outscored 12-0 in those matches, including an 8-0 loss in their matchup at Illinois (8/26/18). Haley Hoppe leads the team with five shots on goal while Natalie Yass has three shots on target. Megan Donnally has registered 25 saves for the Huskies.

This will be the first meeting between the Miners and the Huskies.

Going into the weekend, the Miners have scored 10 goals in four games. This is the first time since 2014 that the Orange and Blue have hit double digits for goals in just four contests. A chunk of those tallies came from the home opener against Lubbock Christian (6-1, 8/17/18). That win resulted in the most goals scored in a season opener since a 6-1 victory over Sam Houston State in 2007 (8/31).

Strong Across The Board

The Miners have started their matches defensively strong. They have yet to concede a goal in the first half. They put their attack to the test in the second half scoring the majority of their goals after the break (eight of 10).

Palacios & The Career Rankings
Senior GK Alyssa Palacios has compiled some staggering numbers during her career in the Sun City. The result has been her stamping her name throughout the UTEP career record book. She enters Friday’s match currently second for saves (360), save percentage (.833), third in shutouts (18), GK games started (63), saves per game (5.71), GK minutes played (5,785:40) and in GK matches played (63) and fifth for goals against average (1.12).

The Basic Facts
UTEP is in its 23rd season as a program, boasting an all-time record of 249-169-30. The Miners are under the direction of 18th-year head coach Kevin Cross who sports a mark of 207-121-23 in that time frame. He is assisted by two former Miners (Heather Clark and Jessie Pettit).

A Unique Blend
UTEP’s roster of 23 for 2018 has a unique blend with 12 native Texans, seven individuals hailing from Canada and a quarter that call Arizona home.

A Maturing Roster
In 2017 20 of the 27 members of the squad were underclassmen, so it’s only natural that this year’s squad has a bit more experience. In 2018 the Orange and Blue feature a unit where 14 of the 23 individuals are either freshmen (seven) or sophomores (seven). There are four juniors and five seniors who are providing leadership for the still relatively young group.