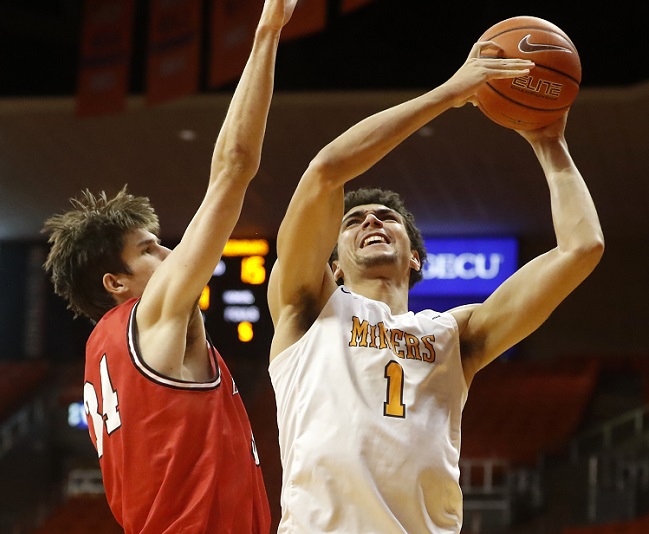 Tydus Verhoeven recorded his first career double-double on a UTEP career-high 15 points and career-best 10 rebounds, while Christian Agnew led UTEP with 16 points off the bench, leading the Miners (4-2) to a decisive 79-59 victory against Benedictine University at Mesa on Sunday evening in the Haskins Center.

UTEP built a 10-0 lead out of the gate and never looked back. The Miners led by as many as 19 points in the first half, and ballooned that into a 26-point lead in the second half.

“We had really good energy to start the ball game, and we had really good energy at practice yesterday. Our guys came in and really paid attention to detail in term of the energy we wanted to have defensively,” third-year UTEP Head Coach Rodney Terry said. “We keep trying to harp on being one of the best defensive teams in the country. I thought our guys came out and competed really hard early to start the ball game.”

Verhoeven shot 6-of-7 from the field, upping his field goal percentage to 73.1 for the season. He added an assist with a pair of steals and two blocked shots to his stat line.

“He had a really good fall prior to the start of the season,” Terry said. “Tydus probably came back as one of our better guys in shape. His body looked great when he got back. He and Bryson and those guys get to the gym early in the morning and come in and do the extra work. It’s really paying off for them. I said to Tydus prior to the season you’ve brought a great level of energy on offense last year in terms of offensive rebounding, you gave us a really good defensive presence last year, and we’re going to need you to score the basketball this year.”

Verhoeven is averaging 6.8 points per game after averaging 1.5 points last season. Verhoeven’s collegiate career high was a 21-point effort while at Duquesne his freshman season (2017-18).

Agnew, in just his second game as a Miner, shot 6-of-13 from the floor and went 3-of-5 from the foul line. He also tallied two assists and a steal.

UTEP grabbed a season-high 54 rebounds, while it was the most during the Rodney Terry era. It was also the most boards since UTEP recorded 56 on November 14, 2015. The Miners also outscored BenU Mesa 38-18 in the paint.

The Miners only turned the ball over eight times and forced 11 Benedictine turnovers that included eight steals. UTEP blocked five shots as Bieniemy, Sjolund and Onyema were part of the block party.

Up next. UTEP will host Our Lady of the Lake on Monday, Dec. 28. Tipoff is set for 7 p.m. in the Haskins Center. A determination on whether fans will be permitted at the game will be made at a later date.

The Miners and Saints can be heard on 600 ESPN El Paso with “The Voice of the Miners” Jon Teicher calling the action. The contest will also be streamed on CUSA.tv.