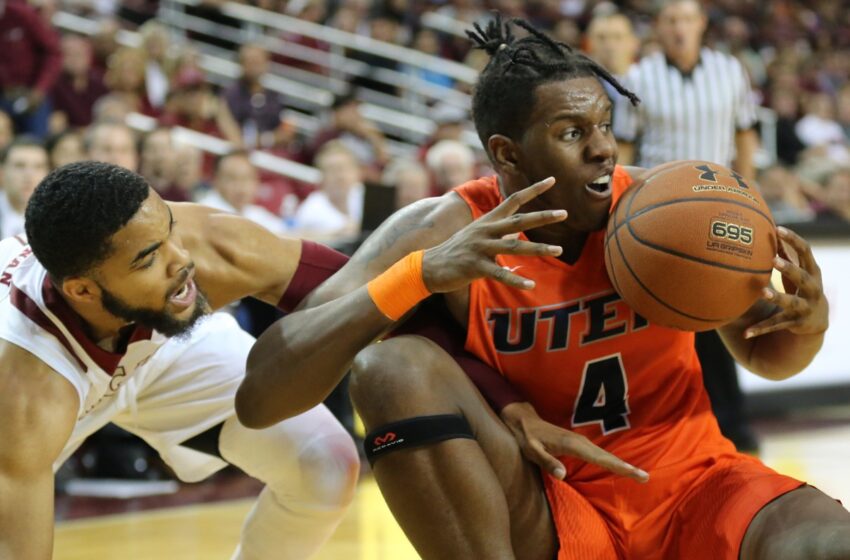 Down to only nine scholarship players, including two over 6-7, the UTEP men’s basketball team battled NM State to the end before falling 72-63 on Saturday night at the Pan American Center.

UTEP was able to get within six three times the rest of the way, the last at 68-62 with 52 seconds remaining, before the Aggies closed it out with free throws.

Evan Gilyard scored in double figures for the first time as a Miner, tying Paul Thomas for team-high scoring honors with 14 points.  He added five rebounds and two steals.

“He’s got quickness and strength,” Floyd said.  “He was a guy who had to do most everything for his high school team.  The next step in his growth will be his ability to get in the lane and make plays for others, to make plays for perimeter guys and post guys dumping off, understanding clock situations, that kind of thing if we’ve got eight, nine, 10 seconds on the clock, how we want to go play in those situations.  But he’s a young guy and we love that he’s a Miner.  He’s competing and that’s the best thing that he does.”

Keith Frazier and Omega Harris added 13 points each for UTEP.  Frazier pulled down seven rebounds as the Miners predictably were dominated on the glass, 46-31.

NMSU also shot better (43.9 percent to 36.8 percent) and made 10 three pointers, including three from Sidy N’Dir.  A key stat in UTEP’s favor was an 18-5 edge in points off turnovers.  The Miners had 11 giveaways and 16 takeaways on the night.

“To have 11 turnovers in your first road game, we can live with that,” Floyd said.  “I think a lot of guys will look back at a shot or two that didn’t go down, a free throw or two that didn’t go down early in one and one, but those things are going to happen throughout the course of the game.  We made a nice run to start the second half.  [Johnathon] Wilkins made a couple of big shots for them, big threes that we felt like we were going to have to live with given our lack of size and the fact that we needed to protect the interior.  I thought we gave it everything that we had.”

The Miners’ two big men – Thomas and Smith – played 30 and 17 minutes respectively.  Smith fouled out, and Thomas ended the game with four personals.

“I don’t think there is a team in the country tonight that played that didn’t have nine fouls from their four or five interior players between them,” Floyd said.  “We had nine between two.  So that’s where we are right now.  And until Matt gets back, we’re going to go fight it.  Trey Wade hopefully will get healthy at some point.  He was going to start tonight and was unable to go because of an injury that occurred yesterday in practice with a hyperextended knee.  But we played with a lot of grit.”

Lofton, who came in averaging 25.3 points per game, got going late for the Aggies with 13 points over the final 14:18.  He finished with 18 points and eight rebounds.  N’Dir added 13 points and Wilkins had 10 for NMSU.

“We played a team that had 25 offensive boards against the Lobos,” Floyd said.  “They had 10 tonight and given the circumstances of the game, I thought that was something that we could almost live with.  Our guys had a real purpose to what we were trying to do and I’ve got a lot of respect for how hard we played tonight.”

The Miners will open a season-long nine-game homestand against 4-1 Lamar on Monday at 7 p.m.