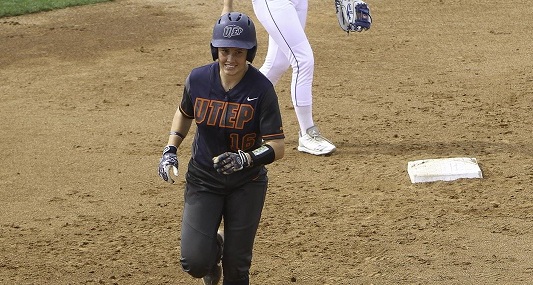 Ariana Valles had a monster second game, with three hits and two RBIs for the Miners. Kacey Duffield blasted her fifth homer of the year and recorded two RBIs on the day. The senior also reached base in every single at-bat during the final game of the day. Cortney Smith went yard with the sixth bomb of her senior campaign.

Kasey Flores registered a hit in her lone at-bat of the day, notching her team-high 18th RBI of her freshman season.

The Red Raiders quickly tacked on three runs in their first appearance at the plate, taking the early lead at 3-0.

Duffield led off the second with a looping single into center field. Smith followed by drawing a walk with one out and two on base. That was all of the damage done in the inning from the Miners, who were still facing the three-run deficit.

In the bottom of the third inning, with the Red Raiders threatening again, the Miner defense stepped up by turning a double play. Smith threw out a runner at home. Linda Garcia gunned it to Pate Cathey, getting the Tech baserunner into a pickle and eventually out to end the inning.

The UTEP bats were held in check after the Duffield hit, and Tech ended up taking the game, 10-0, in five innings.

Game Two
The UTEP softball team’s bats came alive, but the Miners couldn’t slow down No. 14 Texas Tech in a 16-8 defeat in the second game of a doubleheader on Tuesday.

The Miners jumped on the Red Raiders in the top of the first frame. Lindsey Sokoloski slapped a single up the middle and then advanced to second on an error. Valles, on the first pitch she saw, sent a shot into left center to score Sokoloski and put UTEP up, 1-0.

Texas Tech poured on the offense in the bottom half of the inning, scoring eight to claim the lead, 8-1.

Ilena Santos hit a ball into deep right center for a double to lead off the second inning. Valles smashed a single into center field, scoring Santos and cutting into the Tech lead at 8-2. Duffield came to the plate next. She destroyed a ball into left center for her fifth homer of the year to make it 8-4.

Texas Tech had another good outing at the plate, pushing through four runs in the second frame and extending its lead to 12-4.

To lead off the third inning, Smith hit an absolute rocket over the left field fence, the sixth of her senior season, putting a dent in the Red Raider lead at 12-5.

The Orange and Blue were not going to lie down for the No. 14 team in the country, as Valles led off the top of the fourth with a single. Duffield followed up with a single of her own, and then Pate Cathey scored Valles on a fielder’s choice to make it 12-6. Kasey Flores entered the game, and registered a pinch-hit single to score Duffield. Flores found her way across the plate when Garcia sent a double down the left-field line, cutting the margin to 12-8.

Texas Tech ended up scoring four runs in the bottom half of the fourth, and the Miners could not decrease the gap, eventually falling to the Red Raiders, 16-8.

> Kacey Duffield has now reached base safely in 19 of the Miners’ 20 games, and smashed her fifth dinger of the year

>> Flores recorded her team-leading 18th RBI of her freshman campaign

On deck, the Miners will open Conference USA play with three games against Charlotte (March 9-10). This will also be the first home action of the season for UTEP in its return to Helen of Troy.