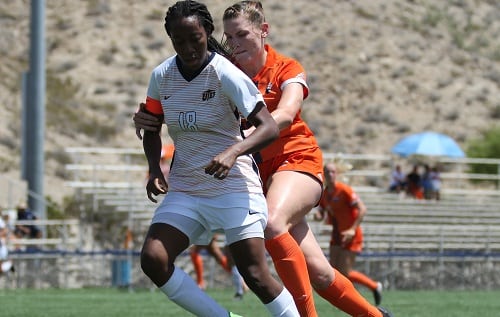 Lauren Crenshaw (60’) and Natalie Valentine (67’) got on the score sheet but the UTEP soccer team ultimately fell to The University of Texas Rio Grande, 3-2, Sunday afternoon at University Field.

“We didn’t have our shape on defense when UTRGV would go on the break,” UTEP head coach Kevin Cross said. “We made mistakes that we can fix for our next game on Friday.”

The first half proved to be the calm before the storm with both teams struggling to find their groove under the scorching sun. The Miners were able to notch five shots, with two being on target. The Orange and Blue defended against four shots from UTRGV, forcing them all to be wide of the goal.

Senior goalkeeper Alyssa Palacios recorded all four of her saves in the second half. She was put to the test early on after the break. Palacios made consecutive saves in the 46th and 48th minute.

UTRGV was able to break the deadlock with the goal from Bonney in the 54th minute. UTRGV took advantage of a free kick taken by Gina Steiner, which hit off the cross bar and was finished inside the box by Bonney.

The Miners responded within five minutes, getting a penalty call in the 59th minute. Crenshaw stepped up to the spot and tucked the ball away in the bottom left corner. The junior defender netted her second career penalty kick goal for the Miners in the process.

UTEP kept up the momentum with a ball crossed into the box by Carleigh Simmons and controlled by Valentine. Under pressure in the box, Valentine fought off a defender and scored her first career goal, giving the Miners a 2-1 lead.

UTRGV picked up the first yellow card of the game, issued to Bonney (73’). The foul gave UTEP a free kick from 30 yards out. Simmons sent a perfect ball into the box, which was headed home by Anna Jimmerson but the sequence was wiped out on an offside call.

Given new life UTRGV tied the game with a long ball played ahead from Katherine Stokely to Zapata in the 77th minute.

UTRGV pressured the Miners late in the second half, earning a penalty call to go its way in the 80th minute. Bonney stepped up to the spot and netted her second goal of the game.