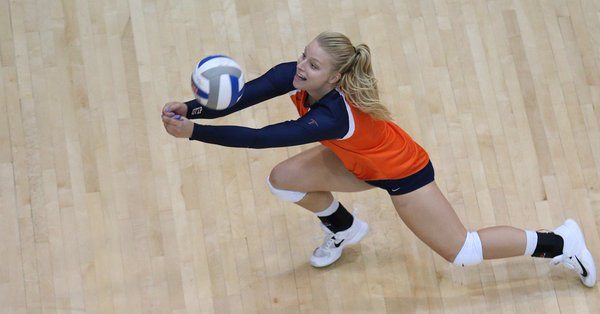 LAS CRUCES, N.M.- The UTEP women’s volleyball team fell to rival NM State 3-0 in the FirstLight Federal Credit Union’s Battle of I-10 at the Pan American Center in Las Cruces.

Freshman Cheyenne Jones paced the Miner offense with eight kills, followed by Macey Austin with six and Ali Vidali with five. Amanda King and Sahara Martinez split the setter duties, with King dishing out 14 assists and Martinez adding 10 of her own.

Almost every Miner who stepped on the court recorded a dig, with Briana Arellano leading the defense with 11 while libero Niki Cebak followed with eight. The Miners had three service aces on the day, one apiece from Mallory Yost, Arellano and Cebak and also recorded eight block assists, including two from Yost and two from Austin.

Set one began with NM State jumping out to a 6-3 lead before Jones and Yost notched kills and the Miners capitalized on Aggie attack errors to tie the set at eight. The Aggies would make another run before the Miners scored two unanswered points behind a Maddie Morgan kill and another attack error from NM State to bring the score to 17-14 and force an Aggie timeout.

The Miners notched three more points, two coming from Aggie errors and the other from a big Jones kill to get within one, 18-17. A big run by the Aggies would bring up set point, but the Miners, full of fight, spoiled the set point with consecutive kills by Yost and Amanda. The Aggies would respond with a kill of their own, ending set one 25-19.

Set two was another close game that saw five ties. The Aggies again struck first, but Morgan and Austin would each throw down kills to put the Miners on the board and tie the set at two-all.

NM State would score again from a kill and an attack error by the Miners, but UTEP would notch five unanswered points to begin a run, started by a setter dump from King, which was followed by big kills from Vidali and Jones, a block assist by Jones and Morgan, and an Aggie attack error to grab the set lead 7-4.

A back-and-fourth effort would ensue with the Aggies’ Sasha-Lee Thomas and Kassandra Tohm matching the Miner kills from Jones, but Ashley Grzebeniak and Vidali turned King’s sets into kills to extend UTEP’s lead to 10-6. The Aggies would climb back to meet the Miners at 14-all, before taking a 18-15 lead off consecutive kills by Tohm and Jordan Abalos.

A Miner attack error and an Aggie block would force a UTEP timeout, but Arellano jumped out of the timeout with a kill to breathe life back into the Miners and bring the score to 20-17.

Austin would record another kill and an attack error by NM State would give the Miners two more points, but the Aggies rallied in front of their home crowd to take the set 25-19.

The Miners showed promise in set three, getting a 6-4 lead and keeping the Aggies at a two-point deficient before NM State tied the set at ten. UTEP would get another two point lead after freshman duo Martinez and Jones teamed up twice for two more kills and the set lead 12-10, but a 4-0 run by the Aggies would put them up 14-12.

Vidali and Yost would tally two more kills for the Miners, but two NM State kills matched by two UTEP errors would prompt a Miner timeout with the 18-14 score.

Out of the timeout, Yost and Vidali teamed up to stop the Aggie offense, but NM State pushed three more points from two kills and a block assist to go up 21-15. Austin would hammer a vital kill for the Miners and Yost served up an ace to bring the Miners within four, 21-17. An attack error on behalf of the Aggies gave the Miners one more point, but the Aggies took the set 25-18 and the match 3-0.

The Miners will begin conference action this weekend with a two-game home-stand, beginning with Rice on Friday, Sept. 22 and ending with a Sunday match-up with UAB.

First serve against the Owls on Friday is set for 6 p.m., while Sunday’s match with the Blazers is set for noon.