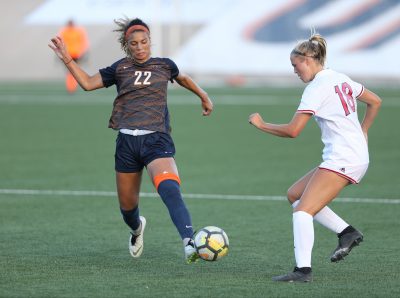 UTEP fought against a strong head wind in the first half and registered five shots, forcing Malia Vanisi to make two saves. The Lobos scored early in the game with a cross put into the penalty box that was finished by Floth. The second goal came off a corner kick and was headed home by Kirton.

The first half proved to be a physical one with a combined 19 fouls. Junior Lauren Crenshaw earned two free kicks for the Miners. In the 24th minute, Carleigh Simmons took a free kick 30-yards away from goal, lofting the ball into the penalty box. Nicole Pugsley connected on a header, putting the ball just wide of the goal.

Alyssa Palacios registered four saves in the first half and was only called upon once in the second stanza. Her five saves in the game move her up to 32 on the season. Palacios (374) also inched closer to reaching Amanda Smith (438) in all-time saves, needing just 64 saves this season to tie the program career standard.

The Miners took a total of six shots in the second half, putting pressure on the Lobo defense. UTEP found a spark on the counter with a ball played forward by newcomer Jojo Ngongo to the feet of Pate. The sophomore controlled the ball on her first touch, hitting the ball with a clinical left foot bypassing Vanisi to the goal.

The Orange and Blue continued to press the attack, earning a corner kick in the 82nd minute. Pate put the ball into the box and a scramble ensued in front of the net, but the Lobos’ defense was able to clear the ball.

The Miners will travel to Ogden, Utah, next to face Weber State on Sunday at 1 p.m. MT.