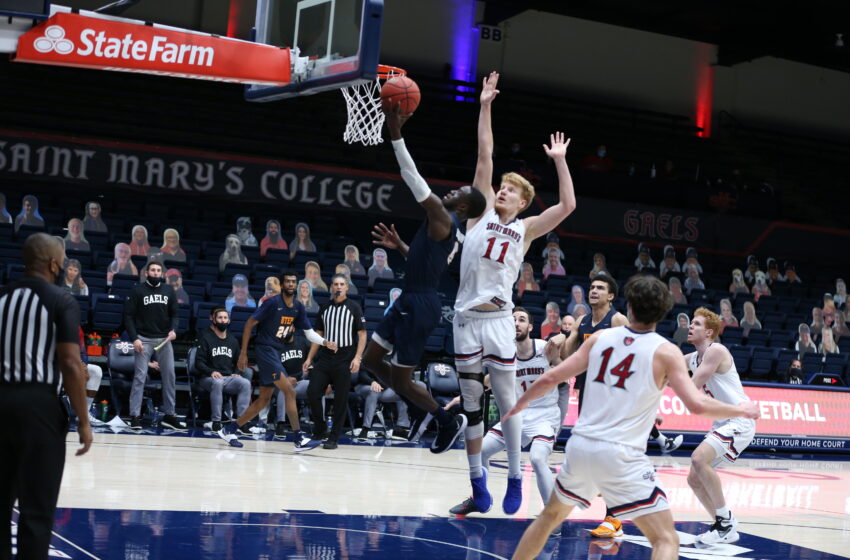 UTEP’s Souley Boum played all 40 minutes and registered his third consecutive game with 20-plus points to open the season. | Photo by Tod Fierner

MORAGA, Ca – Bryson Williams (17 points) and Souley Boum (21) combined for 38 points, but the Miners didn’t have an answer for Tommy Kuhse. The senior point guard tallied a career-high 24 points and tallied five assists, leading Saint Mary’s College (5-1) past UTEP (2-1), 73-61, on Tuesday night at the UCU Pavilion.

“We did a lot of good things in terms of working the game, and really we’re still trying to season ourselves a little bit. [Saint Mary’s College] has played five games to this point and played some pretty good competition, and have a feel for who they are,” third-year UTEP Head Coach Rodney Terry said.

“They shot over 61 percent in the first half and they ended up getting to the foul line 14 times. We really didn’t do a great job of putting pressure on the basket and getting ball movement.”

Boum played all 40 minutes and registered his third consecutive game with 20-plus points to open the season. Williams added eight rebounds to his stat line, while scoring 15 points in the second half.

After Efe Odigie gave the Miners a one-point edge (12-11) on an offensive rebound with 12:56 left in the first half, the Gaels answered with a 14-0 run over the next four minutes to take a 25-14 lead and never looked back. SMC built a lead as much as 17 points late in the first period.

Tydus Verhoeven ended the half with a layup off a Jamal Bieniemy assist to get UTEP within nine points (38-29). But UTEP shot only 38.9 percent in the first period, while Williams was held to two points and one rebound after getting into early foul trouble.

However, Williams blossomed in the second half with a pair of three pointers to get UTEP within four points (44-40), but SMC followed with a 5-0 run to go up nine at the 15:12 mark.

“We battled through and cut the game to a two-possession game in the second half, but we just couldn’t get over the hump there,” Terry added.

SMC shot over 54 percent from the field, including 61.9 percent in the first half.

UTEP only turned the ball over eight times, but it struggled from the floor, shooting only 37.5 percent overall and 6-of-17 threes. The Miners grabbed 12 offensive boards, but couldn’t convert most of those into points.

The Miners only registered six assists after totaling 43 their first two games of the season.

Verhoeven was in foul trouble and sat most of the second half, but made all three of his field goal attempts. Odigie came off the bench early in the first half after Williams picked up his second foul, scoring four points and grabbing four rebounds. Bieniemy and Keonte Kennedy struggled shooting the ball, combining for 3-of-21 from the floor. Bieniemy led the Miners with four assists, while Kennedy scored six points with four rebounds.

SMC’s Matthias Tass chipped in with 14 points and five rebounds, while Ducas scored 11 points. Kyle Bowen led with seven rebounds and made both of his free throws.

Up next,  UTEP will hit the road for its second of three consecutive road games at Arizona on Saturday, Dec. 12. Tipoff is set for 4 p.m. MST in the McKale Center.

The Miners and Wildcats can be heard on 600 ESPN El Paso and will be televised on the Pac-12 Network.