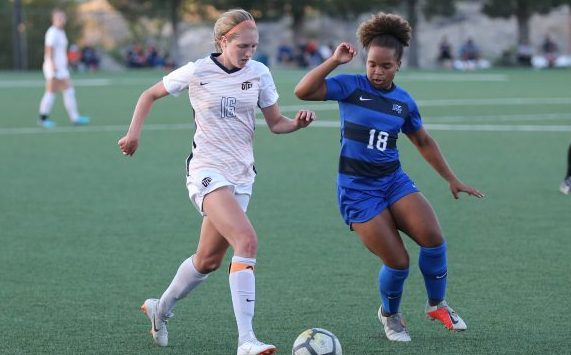 The UTEP women’s soccer team found the back of the net three times as Carleigh Simmons (46’), Vic Bohdan (72’) and Lauren Crenshaw (84’) added their names to the scorer sheet, but ultimately fall to WKU 4-3 on Sunday afternoon.

The Lady Toppers jumped out to an early lead with a goal in the opening six minutes coming from Ambere Barnett. Barnett would add an assist to her stat line in the 20th minute, feeding a pass to Sarah Gorham giving WKU a two-goal lead.

The Miners would respond with a header coming from Nicole Pugsley in the 24th minute. Pugsley, using her height advantage to get over a WKU defender, put the ball just wide of the net.

WKU’s Barnett would find her second goal of the game, off of a 25-yard free kick, in the 34th minute giving the Lady Toppers a three-goal advantage.

The second half provided a flurry of goals, as UTEP’s Simmons got the Miners on the score sheet early in the second half. She tucked away a rebounding shot from Vic Bohdan, marking her first goal of the season.

WKU responded with a goal in the 56th minute. Gorham netted her second goal of the game, combining with Barnett again making the score 4-1.

Closing in on the final 20 minutes of regulation, the leading goal scorers for the Miners Vic Bohdan and Lauren Crenshaw cut the lead down to one. Bohdan notched her fifth goal of the season going one-on-one with WKU GK slipping the ball past her to the back of the net.

On what could be the goal of the year, Crenshaw lined up a 25-yard free kick and placed the ball perfectly over the GK in the final five minutes of regulation. UTEP couldn’t find the final goal to tie the game in regulation putting together five shots in the final half.

UTEP will be back in action on Thursday, Oct. 11 with a matchup against LA Tech in Ruston, La.