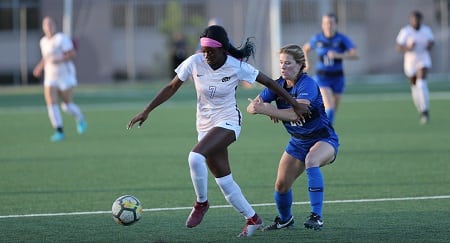 Senior goalkeeper Alyssa Palacios registered eight saves, including turning away a penalty kick, but UTEP’s offense couldn’t get on track in a 3-0 setback to Middle Tennessee on Sunday night.

Palacios registered eight saves on the night, putting her at a total of 350 saves in her career. She trails Amanda Smith (1996-99), who holds the all-time program record in saves with 438.

The Miners took their chances early in the first half. Anna Jimmerson was able to connect on a header towards goal, putting the ball just wide in the 12th minute. Nicole Pugsley added to the attack with a shot at MT’s goal, forcing Celeste Barnard to make a save in the 23rd minute.

DePriest opened up the score sheet for the Blue Raiders after receiving a ball played through the defense from Hannah Tillett. She controlled the ball inside the box and finished the play with a ball past Palacios.

The Miner defense stood tough in the final 15 minutes of the opening half, fighting off a flurry of attacks from the Blue Raiders offense. A crucial save came in the 45th minute, when MT’s Amber Hoot put a shot on goal, but Palacios made a finger-tip save.

UTEP opened the second half with a strong offensive push getting a shot from April Pate in the 50th minute that went just over the cross bar.

DePriest found her second goal of the game when she connected with Tillett, giving the Blue Raiders a 2-0 lead. She completed her hat trick shortly after on a ball played from Casey Riemer to seal the game for MT.

The Orange and Blue will open a three-game road trip, starting with a match at WKU on Sunday, Oct. 7 set for 12 p.m. MT.