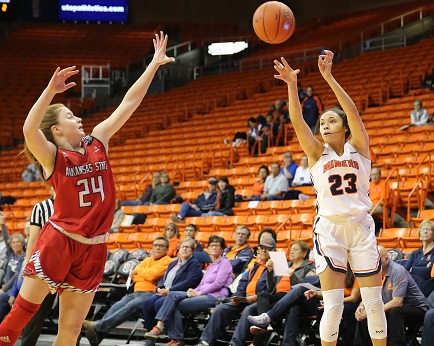 SAN ANTONIO – Sophomore Alexa Hoy poured in a career-high 22 points off the bench to pace a trio of Miners in double figures to help UTEP topple UTSA, 73-60, on the road in the Conference USA opener for both squads inside the Convocation Center Saturday afternoon.

“Today was a great team win,” UTEP head coach Kevin Baker said. “I’m so proud of how we finished the game and closed it out. But, more importantly, we rebounded our way to the victory.”

Jordan Alexander (season-high 18 points) and Zuzanna Puc (15 points) joined Hoy in double figures for scoring while freshmen Ariana Taylor (eight points) and Sabine Lipe (seven points) also got after it. UTEP crushed the Roadrunners, the top offensive-rebounding team in the league, on the boards (45-28), with Alexander snagging 11 rebounds to post her second double-double this season. Lipe got involved as well by pulling down a career-best seven caroms.

But the story of the day was Hoy, who put on a show in front of her mom, aunt and grandmother. She nailed 7-12 from the floor, including 2-5 from distance. She also making 6-7 free throws, including 5-6 in the final frame, to help ice the contest.

UTSA scored the first six points of the contest before the Miners used a runner in the lane from Puc and a straightaway triple by Taylor to cut the margin to one (6-5, 7:13 1Q). After the two sides traded scores, the Roadrunners closed the frame on a 9-2 surge to put UTEP down by nine (18-9) through 10 minutes of action.

UTSA extended its lead to double figures (22-12) early in the second quarter, but UTEP refused to just fold up shop. The Orange and Blue peeled off nine consecutive points to get within one (22-21, 4:17 2Q). Hoy accounted for seven of the points in the sequence, filling the void created by having Puc and Katarina Zec on the bench due to foul problems. It was back-and-forth the rest of the frame, with Hoy eventually accounting for 12 points in the period to help the Miners pull even at 30 going into halftime.

The Orange and Blue scored the first five points of the third quarter, including an old-fashioned 3-pointer from Hoy. UTSA struck back with six straight points but UTEP didn’t blink. It countered with a 7-0 surge, with Hoy scoring or assisting on five of the points. As it turned out, it proved to be a lead that UTEP would not relinquish.

The Miners had to work for it, though, with the Roadrunners trailing by four (56-52, 5:39 4Q) midway through the final frame. A mini 5-0 run by the Orange and Blue gave them some breathing room, and the home side didn’t get closer than six the rest of the way.

UTEP continues its roadswing to begin league action by playing at North Texas at 6 p.m. MT/7 p.m. CT on Thursday.