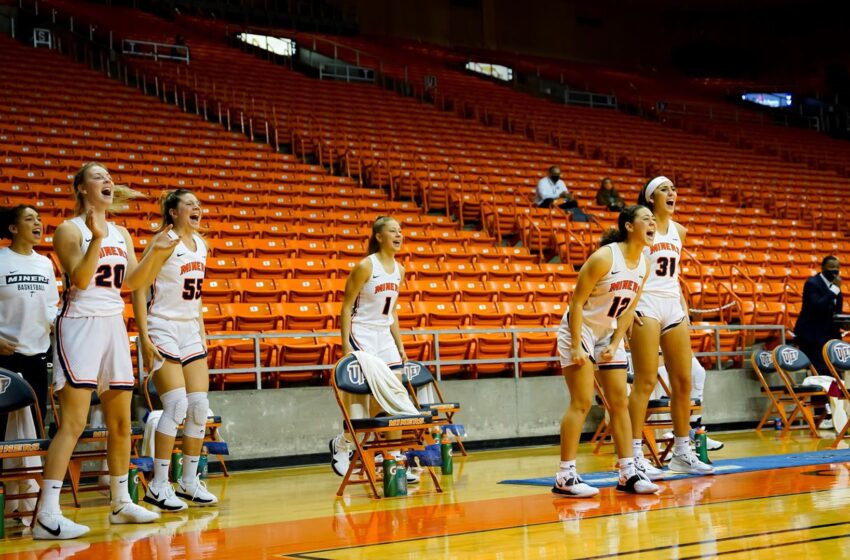 The Miners lost the lead that they held onto for over 32 minutes midway through the fourth quarter and trailed by as much as five points with under five minutes to play.

At the 4:25 mark, sophomore guard Avery Crouse pulled down the biggest of her three offensive rebounds (nine total rebounds) which led to a score from senior forward Dejanae Roebuck to cut the deficit to two points, 61-59.

The Miners pulled down 13 offensive rebounds which translated into 15 second-chance points.

With the clock winding down to 90 seconds, junior guard Sabine Lipe put her body on the line to draw a charging foul – her third time doing so of the game and fifth on the early season.

Sophomore guard Katia Gallegos scored the go-ahead bucket for the second time this week on the next offensive possession, finishing her day with a game-high 17 points to give the Miners the lead for the remainder of the contest.

Similar to the start against New Mexico State on Wednesday, Gallegos swiped for two steals and two fastbreak layups as UTEP opened the game on a 9-0 run with seven miners scoring at least one point in the first period. Sophomore guard Arina Khlopkova closed the first quarter by knocking down a three-pointer and buzzer-beating layup on back-to-back possessions.

Gallegos continued her hot streak into the second quarter knocking down two 3-pointers.

In addition to leading UTEP in rebounds, Crouse picked up her second and team-leading third steal as well of six of her ten points in the third quarter. Lipe was second on the team in rebounds (6) and had the most crucial board on the Cardinal’s final possession which sealed the victory.

Freshman forward Dagne Apsite logged her first career points and minutes as a UTEP Miner in the fourth quarter.

Sophomore forward Tatyana Modawar contributed six points on 3-of-5 shooting in only 11 minutes of play. ‘