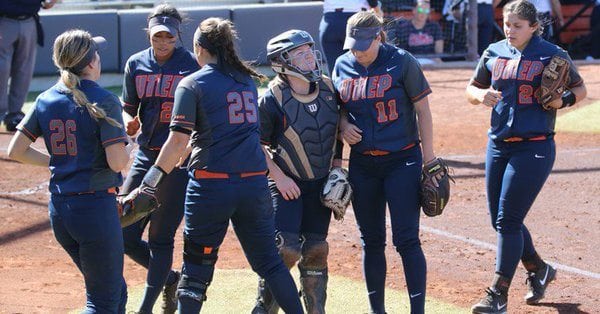 The UTEP softball team has done its part up to this point in keeping its postseason bid alive. The Miners (20-33, 9-14 Conference USA) rallied twice to defeat the Lady Techsters (33-20, 15-8 C-USA) on a festive Cinco de Mayo at the Helen of Troy Softball Complex.

“(The Miners) were fighters today. They just came, no matter what happened, kept plugging away and didn’t get down on themselves and kept going,” fifth-year UTEP head coach Tobin Echo-Hawk said. “It’s like I told them, they just have to keep fighting and they did a great job of that.”

UTEP defeated LA Tech, 5-3, in game one behind Taylor Sargent’s go-ahead three-run home run in the sixth and followed with a 7-4 triumph in game two behind a four-run fifth highlighted by a Cortney Smith go-ahead RBI single. The Miners also received help from Charlotte, as it swept Southern Miss on Saturday. FIU and WKU series was postponed today and will play a pair of games on Sunday. If UTEP defeats LA Tech on Sunday and FIU sweeps WKU, the Miners will advance to the C-USA Softball Championship in Charlotte, N.C., next week as the no. 8 seed.

“The WKU-FIU series is out of our hands and we need to take care of business on Sunday,” Echo-Hawk said. “We can’t focus on anyone else but ourselves and make sure we show up tomorrow. LA Tech also needs a win and are playing for the number one overall seed in the tournament. Again, we need to show up, fight and worry about ourselves in this situation.”

Sunday’s ‘Senior Day’ contest is set for a noon start. The FIU-WKU two-game set will start at 10 a.m. MT/11 CT in Bowling Green, Ky. UTEP’s trio of seniors will be celebrated following the final out.

The UTEP seniors were the difference in today’s contests. Sargent hit a go-ahead home run in the sixth with UTEP down 3-2 in game one, and Courtney Clayton connected on a two-run home run in the third inning that started a game two rally in which the Miners outscored LA Tech 7-0 after being down 4-0 after two frames. Kailin Ryder went 3-for-3 and tallied a RBI in game one that got UTEP within a run (3-2) prior to Sargent’s first home run since Feb. 10 against Saint Mary’s College in Tempe. Ariz.

“It’s just nice to see what the three seniors did today. They deserve it so much, they work hard and they’re such great people,” Echo-Hawk said. “I think this is the epitome of the end of their careers and I wouldn’t want them to go out any other way. They were big and clutch in certain situations.”

The trio of seniors came up clutch and combined for 10 hits, two home runs, two doubles, a triple and seven runs scored during the Saturday sweep. Clayton registered two more multi-hit games on Saturday, giving her 74 in her career and tying with Camilla Carrera for no. 1 on the program’s all-time list.

UTEP 5, LA Tech 3
The Miners found themselves down 3-1 after pinch runner Kailey Anderson scored a run on a wild pitch in the fifth inning. LA Tech, with only one out, looked to extend its lead in the fifth with bases loaded, but relief pitcher Devyn Cretz, who entered the circle with bases loaded, recorded two huge outs to get her squad out of the jam.

In the bottom sixth, Clayton singled to center field and advanced to second base on an error. Ryder then connected on a full-count pitch and doubled in Clayton. Kacey Duffield followed with a single to put runners at the corners for Sargent, who got a hold of a 1-0 toss from Presslee Gallaway (17-7) and sent it over left field, giving the Miners the go-ahead 5-3 lead.

Starting hurler Kira McKechnie allowed only two hits in 4.1 innings of work. Cretz (3-4) earned the win in 2.2 frames of work, while allowing zero hits, no runs and tallying two K’s. She won her first game since Feb. 17 at UNLV. Cretz didn’t allow a baserunner in the seventh, retiring the Lady Techsters in order to clinch the win.

One of the defining plays of the contest came during the fourth inning when LA Tech loaded the bases with two outs. Katie Smith had a chance to blow the game open but sent a 0-1 pitch to left center that looked like it might fall and clear the bases. But center fielder Ariel Blair, who possesses speed and has made spectacular plays in games prior, raced to her left and made a diving catch to record the third out and save three runs from being scored.

UTEP recorded nine knocks in game one as Duffield finished 2-for-3, while Blair singled in the first and scored the first run for the Miners on a Clayton RBI single.

UTEP 7, LA Tech 4
It took some time for starting pitcher Julia Wright to settle down as LA Tech scored two quick runs in the first inning and another pair of runs during the second to take a 4-0 lead.

But Wright settled down, tossing a complete game and picking up the victory, her sixth of the season. Wright allowed eight hits, four runs (two earned) and struck out four in the process.

“Julia didn’t start the best, but she came back and did a fantastic job for us,” Echo-Hawk said. “We played great defense – in both contests – and got timely hits.”

With Wright in her rhythm, Clayton got the scoring spree started when she drilled a 2-0 pitch over left field that made the scored 4-2 after three frames.

Starting short stop Ariana Valles helped Wright’s cause as she turned a double play in the fourth to end the top half. It was UTEP’s league-leading 22nd double play turned this season.

The Miners then took the go-ahead lead during a four-run fifth inning. Pamala Baber drew a full-count, leadoff walk. Blair then registered her second bunt single of the day to put two runners on. Valles then used a sacrifice bunt to advance the runners, but an error by the second baseman on a throw to third plated Baber to get UTEP within a run at 4-3, while Blair advanced to third.

The Miners made them pay.

Duffield singled in Blair to tie the game at 4-4. Smith followed with a single of her own that plated Clayton and the go-ahead 5-4 lead. Sargent drove Ryder home on a single, giving her squad a 6-4 lead.

Ryder extended the lead to 7-4 in the sixth when she singled in Clayton with two outs.