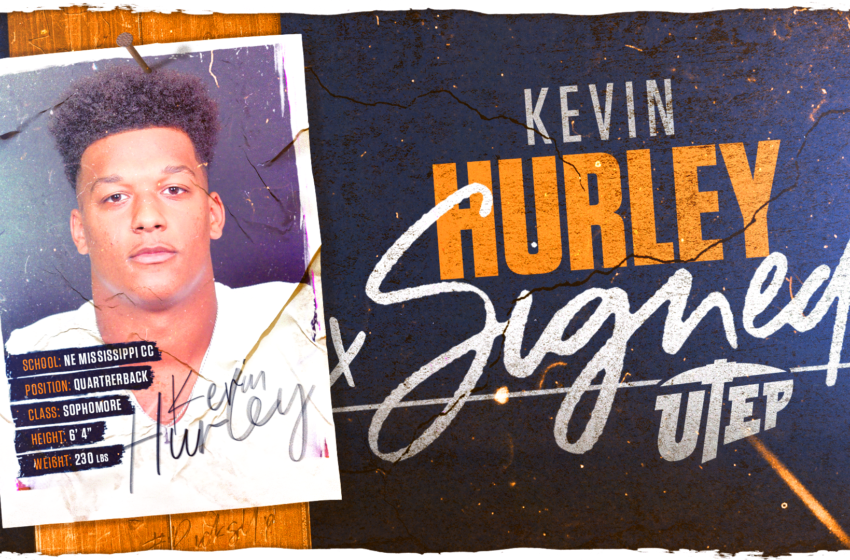 UTEP Football added depth to the quarterback room after signing Kevin Hurley to a National Letter of Intent on the first day of the early signing period on Wednesday.

“Kevin is a very athletic quarterback who throws the ball well,” head coach Dana Dimel said. “He’s 230 pounds and can run really well at that size. He is going to be a real force for us. We thought it was important to add to the quarterback position. I think by doing that, it allows us to be more aggressive with what we do with Gavin (Hardison). By bringing Kevin in, we feel that we have really supplemented the quarterback position to allow us to use all the versatility that our offense can present. Kevin is a football savvy, very intelligent young man with a ton of physical tools and he’s going to be really fun to coach and watch develop. I feel really good about where our quarterback position is right now.”

This past season, Hurley was 56-of-118 passing for 881 yards with 10 touchdowns. He averaged 146.8 passing yards per game and 7.5 yards per attempt as a sophomore for the Tigers. Hurley served as a dual-threat quarterback after leading the team in rushing with 61 carries for 261 yards and a pair of touchdowns. He averaged 43.5 rushing yards per game and 4.3 yards per carry in six games. Hurley graduated from Walnut High School in 2019 before joining the Northeast Mississippi program.

UTEP will have until Jan. 15 to sign additional midyear junior college transfers prior to the regular signing period, which begins on Feb. 3, 2021.

“We are excited about where we are at because we have so many young, talented players in our program that are coming back – some of the marquee players that are coming back – that can lead us into an even better direction,” Dimel said. “With tweaking the roster, we have been able to increase the talent level dramatically. I feel like it has not been an easy ride. We started off our first year only having 11 initial scholarships and having to build from there through the blue shirt wall. We haven’t gotten out of that blue shirt wall completely because we’ve had to continue to build the type of roster that we have now. That left us going into this signing period with just six initials to give.

“We signed a quarterback that we are very excited about. We are still working on some midyear junior college signees and plan on bringing in more of those guys. We’ve had to be careful about not using up all five of our remaining initials. We think we have a good feel for how to recruit here under the circumstances.”

For complete coverage of UTEP Football, be sure to follow the Miners on social media at @UTEPFB (Twitter/Instagram) or click here to visit the official home of UTEP Athletics.

Played in six games last season for Northeast Mississippi Community College … Helped guide the Tigers to a 5-1 record as a sophomore … Was 56-for-118 passing for 881 yards with 10 touchdowns … Averaged 146.8 passing yards per game and 7.5 yards per attempt as a sophomore for the Tigers … Served as a dual-threat quarterback after leading the team in rushing with 61 carries for 261 yards and a pair of touchdowns … Averaged 43.5 rushing yards per game and 4.3 yards per carry in six games … Graduated from Walnut High School in 2019.