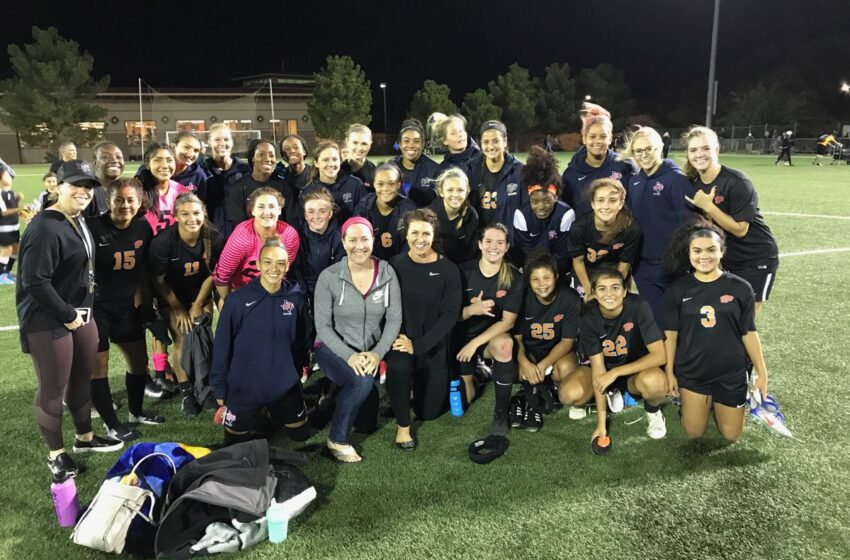 Jackie Soto scored her first career goal (20’) and the UTEP defense did the rest in a 1-0 vanquishing of first-place Charlotte at a blustery University Field Friday evening.

Alyssa Palacios recorded eight saves while the Miners stop troops also was credited with a team save in helping post the shutout.

“In the second half Alyssa came up with a bunch of big saves and we’re so blessed to have her,” UTEP head coach Kevin Cross said. “The first half we had some opportunities; the wind played a big factor. Jackie Soto got a big shot on them. We held tight there in the second half because they have a phenomenal attack. But that’s how conference games are.”

There was nothing doing for either side until the 12th minute when a shot by Charlotte’s Megan Greene trickled in on net where Palacios calmly handled it.

The Miners then launched a counter attack, earning a corner kick that led to a great look for Lauren Crenshaw. She rifled a low, hard shot that forced a diving save by Abby Stapleton to set up another corner kick. UTEP couldn’t generate anything on its second corner.

There was a dangerous situation in the 18th minute with a bouncing ball in the box but Palacios was able to record the save on the point-blank shot from Greene. Two minutes later Soto stole the ball and headed up the pitch. She then absolutely rocketed it into upper 90’s country past a helpless Stapleton to afford the Miners a 1-0 lead.

In the 35th minute UTEP earned its third corner kick of the match after a scramble in the box but it couldn’t convert.

Charlotte earned a corner kick the first minute of the second half, and it nearly capitalized. Remi Roberts hit a header that seemed destined for the back of the net but the Miners’ defense cleared it off the line for the team save.

With the wind at its back Charlotte really ramped up its attack but Palacios and company were ready. She turned away Greene in the 52nd minute and then denied Julia Grainda in the 54th. Sophia Sipprell’s try was gobbled up by Palacios in the 64th minute.

There was a nice run by Crenshaw to draw the defense and then deflected it out of bounds to set up a UTEP corner in the 74th minute but Charlotte cleared. The 49ers then raced up the pitch, setting up Greene perfectly for the header but Palacios punched the shot high. UTEP’s defense then blocked away the opportunity by Martha Thomas on the corner kick.

The Miners closed out the game in style by racing up the pitch in the 89th minute, getting a look for Soto off a header. She was denied but it proved to be a moot point.

“Military Appreciation Day” will highlight Sunday’s 6 p.m.match-up vs. ODU with all military members who show ID at the gate getting in free. There will also be free food-while supplies last-courtesy of Rudy’s Country Store & BBQ, which is doing a pre-game tailgate for the contest against ODU.