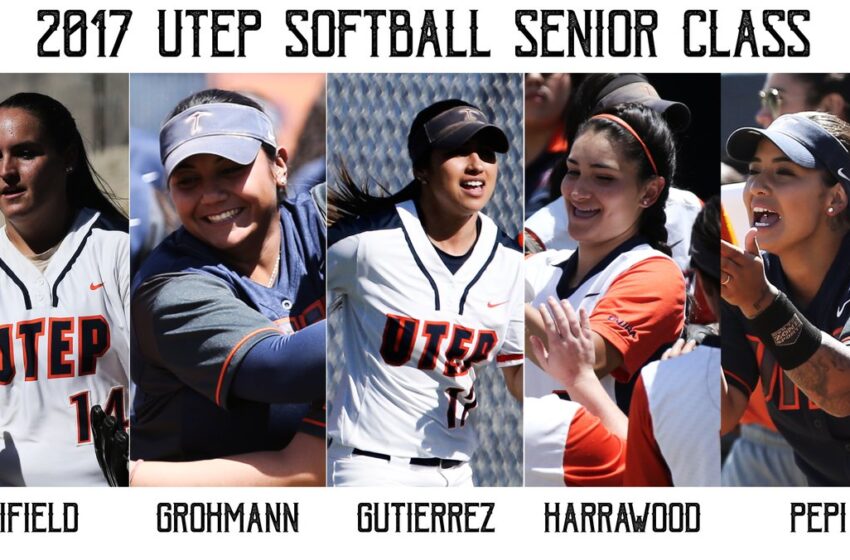 The Miners used three runs in the third that started with a Taylor Grohmann single to defeat the Owls, 6-4, in their final contest of 2017 on Senior Day at the Helen of Troy Softball Complex.

“The season hasn’t gone the way we wanted, but [the Miners] came out and they fought,” Echo-Hawk said. “That’s how we’ve been all year, we just keep fighting. It may not be pretty, it may not go the way we wanted it to but the team never quit. They just kept battling – even yesterday they were scrappy. Today they committed to each other, said they were going to show up and play with everything they have. As a whole, our entire team played a great game. And everyone contributed.”

One the of magical moves was when Grohmann, a senior pitcher, was inserted as pinch hitter in the no. 2 spot for junior Courtney Clayton in the third inning. Grohmann’s first career at-bat produced a single on a 2-1 pitch to left with junior Kaitlin Ryder on and two outs.

“It was nice because [Grohmann’s] mom last night asked me if I can give her an at bat and I said ‘absolutely’, this day is about [the seniors] and that’s the most important thing,” Echo-Hawk said. “She got up there and singled. We worked on some things this past week and, man, when she hit it, it was so exciting. You couldn’t ask for a better moment.”

Continuing the third frame, sophomore Cortney Smith reached after being hit by a pitch to load bases for Kiki Pepi who connected on a two-run single to right that plated Ryder and Grohmann to give the Miners a 2-0 lead. Smith would eventually cross the dish in the frame on an error to put her squad up, 3-0.

Pepi then used her third RBI of the game to put the Miners up 4-1 on a single to right that scored Clayton. In the sixth, sophomore Brianna Red led off with a bunt single, senior Miranda Gutierrez and Ryder each drew walks that set up a Clayton sacrifice fly to center to plate Red. Pepi then gave the Orange and Blue a 6-1 lead another sac-fly to center that scored Gutierrez.

The Owls, however, would not go down easily as they scratched out three runs in the seventh with two outs, but senior hurler Kaitlin Fifield would not let her team come out on the losing end. Fifield earned her third save of the season after throwing 2.2 frames and it was only fitting that Delaney Rickey grounded out to the pitcher to end the Senior Day contest. Fifield ended her career with five saves to rank no. 2 on UTEP’s all-time list.

Grohmann (2-2), whose bat was lit, earned the win after throwing an inning and tallying a strikeout. Senior Erika Harrawood made the start, her staff-leading 17th of the season. Harrawood pitched 3.1 innings, striking out three and walking none.

“It feels great to see our senior pitchers end their careers the way they did,” Echo-Hawk said. “It was a perfect ending for Grohmann to get her last career strikeout. For them to come out and pitch some of their best innings was just a great thing. I think it just shows they have a lot of heart and play for the love of the game.”

Back to the offense, the Miners registered seven big hits on the day, led by Pepi’s 3-for-3 outing. She also finished with four RBI to rank no. 7 with 103-career RBI on the program’s all-time list. Pepi, who was stuck at 99 RBI for the past few weeks, finally broke into the 100-RBI club; the seventh Miner to accomplish the feat. She also finished as the team leader in 2017 with 36 RBI.

“[Kiki] had a great weekend,” Echo-Hawk said. “We worked a little bit on scoring runners this week in practice and changing our mentality. She executed that plan and looked for the pitches we asked her to. To end her career on a RBI was pretty awesome.”

Clayton recorded her seventh double of the season in the fifth, while it was her 38th-career double to rank tied no. 4 with Stacie Townsend. Clayton will enter her senior campaign with 180 hits (ranked fifth) and 101 runs (ranked sixth). Clayton’s .349-career batting average is ranked fourth.

Ryder didn’t have a hit on the day, but did draw a pair of walks and scored run. She hit .455 this weekend and will enter her senior season ranked sixth with a .329-career average. Taylor Sargent finished her junior season with a career highs in RBI (19) and batting (.326), while leading the squad with three triples, also a career best. Sargent will enter her senior year with 650 putouts, ranking fifth on the school’s all-time list.

Smith singled and finished as the team leader in batting with a .364 average. Sophomore Lindsey Sokoloski only struck out once in 136 at bats as one of the national leaders in toughest to strikeout in 2017. She finished her second season with a .316 average. Sokoloski hit .625 (5-8) against FAU to lead the team.

“It’s always nice to know your team is going to play for these seniors to make sure they go out on a good note. It’s also good for our team for next year to end on a positive note,” Echo-Hawk said. “They showed what they’re capable of and moving into next year, we can ride that a bit.”