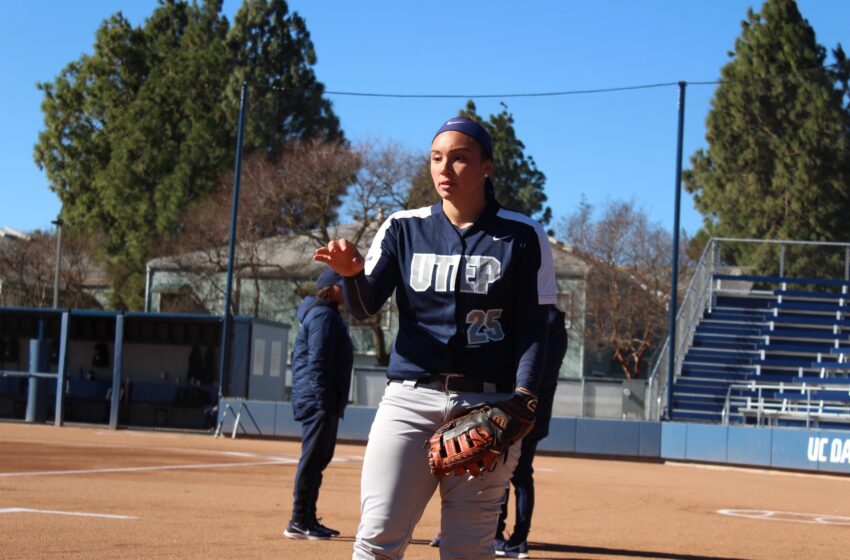 Kacey Duffield extended her reached-base streak to 11 games in a row. Kira McKechnie threw five strikeouts in six innings of work during her outing in game two.

The Aggies brought a run across the plate in the bottom of the first inning to take an early 1-0 advantage over the Miners. Kacey Duffield and Ilena Santos, due to discipline at the plate, reached by drawing walks but were unable to be brought home.

In the top of the third frame, Pamala Baber led off the inning with a walk, and then was advanced to third after a base hit from Pate Cathey. That was all the Miners could muster up offensively in the inning, failing to bring in the base runners.

UC Davis extended their lead (3-0) in the bottom of the third.

The two defenses traded blows up until the top of the sixth inning when Duffield and Cortney Smith both got on base, followed up by a hit by Kira McKechnie to load the bases with two outs. An error by the catcher brought in Duffield to make the score 3-1 in favor of the Aggies, heading into the bottom of the sixth frame.

UC Davis added a run in the bottom sixth to make the count 4-1. In the top of the seventh frame, with the Miners down to their last out, Bryanna Molina connected on a clutch pinch hit to get on base. Cathey followed by getting hit by a pitch to bring the tying run to the plate in Kasey Flores. The freshman sensation had an epic nine-pitch at-bat, but ultimately struck out to end the game, 4-1.

Cathey recorded her first multi-hit game, and Duffield extended her reached base streak to 10 games.

Cathey led off the game for the Miners, and promptly sent a ball into deep center field for a double. However, she would be the only Miner to reach base in the inning.

The Aggies posted two runs on a pair of solo home runs during the first frame to make the score 2-0. Then in the bottom of the second inning, McKechnie, Cathey and Duffield executed a flawless, 1-6-3, double play, leaving an empty frame for UC Davis.

Duffield drew a walk in the top of the fourth inning, extending her reached-base streak to 11 games.

During the top of the fifth frame, Molina battled in an eight-pitch at-bat before hitting a single into right field. Baber came to the plate and was hit by a pitch for the fourth time this season, putting runners on first and second. Flores entered the batter’s box and hit an RBI single into left-center field to cut into the Aggie lead, 2-1.

Heading into the top of the seventh inning, Ariana Valles led off with a single and then advanced on an error by the catcher. A fly ball would get Valles to third base, but that was as far as she got. The final score of the game would be 2-1 in favor of the Aggies.

Up next, the Miners will play two games tomorrow versus Idaho State (10 a.m. MT) and Saint Mary’s (12 p.m. MT) on the second day of the Aggie Invitational.