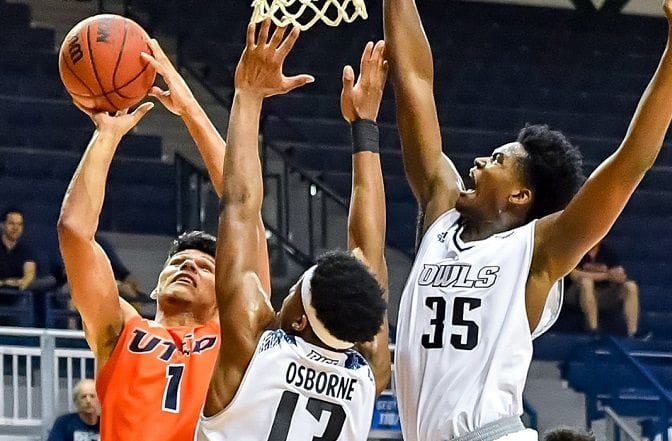 HOUSTON, Tx – Najja Hunter made 10-of-14 shots and scored a career-high 24 points, and Rice pummeled UTEP on the boards in a 76-70 victory on Thursday at Tudor Fieldhouse.

“We lost on the boards tonight,” UTEP Interim Head Coach Phil Johnson said.  “We got dominated on the glass and I don’t see any reason for that.  That was the difference in the game.  We stopped them 10 times I’ll bet, and couldn’t go rebound the ball and come away with it.  You can’t win doing that.”

The game actually started on a promising note for the Miners.  They built a 21-13 lead on a three-pointer by Omega Harris with 11:08 remaining in the first half.  But they went scoreless over the next six minutes and Rice ended the half with a 23-8 run for a 36-29 lead.

“We came out pretty strong in the first eight minutes of the game,” Johnson said.  “We had a pretty good lead.  It became a war on the glass, and we didn’t match their effort on the glass at all tonight.  It has been kind of an ongoing [problem] for us off and on throughout the year.  We have been better in the last four or five games.  But this one tonight was a setback.”

“I thought we got good shots and we defended good enough,” Johnson said.  “We had some slip-ups here and there on some isolation plays.  Hunter made some shots.  We didn’t think he was that good of a shooter, but he lit us up.  We got out to him and he drove by us.  Overall it wasn’t the effort that we needed on the glass and defensively.”

Omega Harris led the Miners with 18 points, including 10 in the last five minutes.  Isiah Osborne added 13 points, Paul Thomas had 12 points and eight rebounds, and Trey Wade gave the Miners a lift in the second half with 10 points and five rebounds.

So it all comes down to Saturday, when the Miners will either need to win at North Texas or hope Rice goes down to UTSA on its home floor to secure a bid to next week’s Conference USA Championship.

“We’ve got to go win Saturday,” Johnson said.  “That’s the bottom line.  We’ve go to play better.  I expected to win here tonight if we played, and we didn’t play a very good game.  We just struggled.  We struggled making some easy shots around the basket, and we just didn’t play physical tonight.”