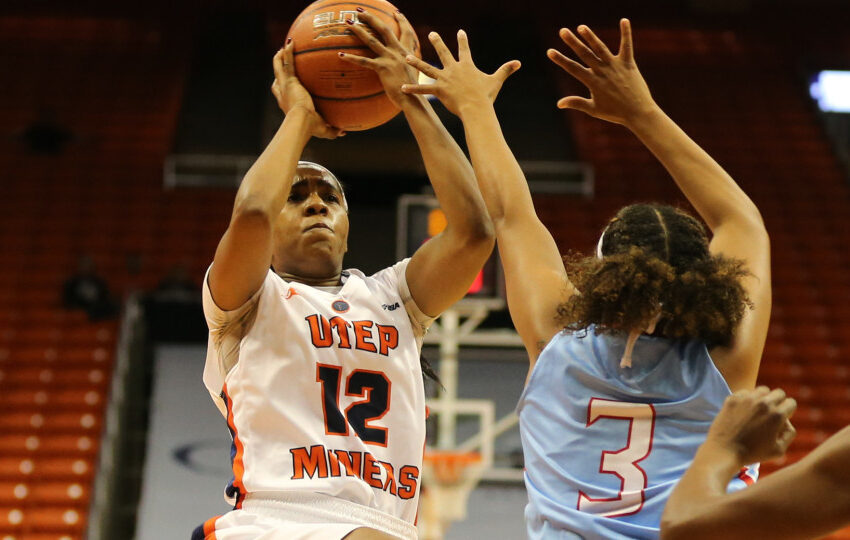 “We just played hard and we’re fortunate to get the win,” UTEP head coach Keitha Adams said. “I thought our defense was tremendous tonight. The rebounding was the key; when you rebound the ball, good things happen. We are going to enjoy this one tonight and then tomorrow start to get ready for Southern Miss.”

While Taylor’s career scoring achievement grabbed the headlines, she also got after it on defense with four steals.

“That’s a monumental thing (1,000 career points) but what I’m really, really proud of her tonight is her defense. What a great night to get 1,000-career points, one when you also know you played your tail off on defense.”

Louisiana Tech came out firing, racing out to a 12-6 lead midway through the first quarter. Howell stopped the surge by converting all three free throws after she was fouled on a triple attempt from the left wing. That play sparked a run for the Miners, who closed out on the first quarter on a 15-6 surge to pull within one (18-17) after 10 minutes of action. Taylor was instrumental with six points in the sequence.

UTEP’s defense picked up in the second quarter, only allowing LA Tech to score 10 points while the Orange and Blue tallied 18 to take a 35-28 advantage heading into the locker room. It was also in the second quarter where Taylor hit 1000 career points on a jumper with only four seconds left in the half, a feat that only 12 other Miners have reached.

After UTEP only allowed three offensive rebounds in the first half, the Miners gave up six in the third quarter. But UTEP did enough things well in other areas, and were still able to outscore (18-15) the Lady Techsters in the quarter. Howell provided a spark off the bench with eight to help UTEP extend its lead to 10 (53-43). Katarina Zec, who had missed the prior six games with a knee injury, sent the quarter out in a style with a long triple to give UTEP that aforementioned 10-point lead.

Going into the fourth quarter with a 10-point lead, the Miners continued to tack more onto their advantage. The resilient Lady Techsters stormed back and brought it back down to six (64-58) with 00:51 remaining. Feeling the loss of Taylor, who fouled out with 2:04 left in the game, the Miners looked to their defense for a final stand. The stop troops delivered and after a technical foul on LA Tech, McKinney converted on both free throws, to essentially end the game.

The Miners will wrap up their three-game homestand by playing host to Southern Miss at 2 p.m. Saturday. As part of “Superhero Saturday” first responders, medical professionals and law enforcement will receive $3 admission. All other tickets are $5 for adults, $3 for kids.