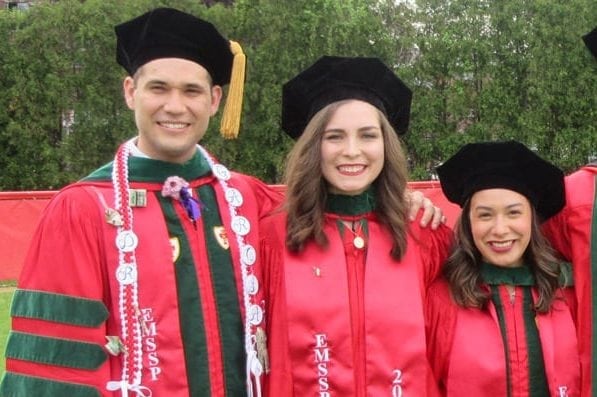 Sisniega — who earned her bachelor’s degree in biology from The University of Texas at El Paso — was among the 137 BUSM students conferred with medical degrees May 17, 2018. In the celebration that ensued, Sisniega’s father gleefully snagged her diploma and has yet to relinquish it.

“My family was really happy,” Sisniega said. “My dad wouldn’t let go of my diploma. In fact, he kept it. I hope he has it in a safe place.”

Transplanted credentials aside, there is no denying UTEP’s unique place among medical graduates during the institution’s spring commencement. Three former Miners – Sisniega, Brenda García, M.D., and Oscar García, M.D. – made up three of the four candidates who walked the stage as part of the Early Medical School Selection Program (EMSSP). In the unique initiative, BUSM collaborates with 13 universities, including UTEP, to better prepare students to navigate the transition to medical school through rigorous undergraduate coursework, early exposure to medical school culture and curriculum, and the development of a unique, supportive community.

BUSM is an urban school affiliated with a teaching hospital that serves a large minority population. Its mission focuses on preparing culturally competent, clinically excellent physicians to meet the health care needs of a diverse population. UTEP is the only public university that takes part in the program, which includes Hispanic-serving institutions and historically black colleges and universities.

At UTEP, students interested in the EMSSP go through the University’s Medical Professions Institute (MPI), which helps students interested in various medical disciplines to pursue their academic journeys beyond El Paso. The success of the three recent BUSM graduates is impressive and a testament to the preparation facilitated through the MPI, said Kristine Garza, Ph.D., associate professor of biological sciences at UTEP.

“I think our students are phenomenal kids,” Garza said. “Given how much they have to go through, how much dedication they have to give, it’s amazing what they accomplish. Having worked with these students through the MPI, we work diligently to have someone helping our students navigate the path to medical professions. We support them creating relationships with faculty. We push them, we constantly ask them, ‘Are you making yourself as competitive as you can?’ Our faculty and staff have close relationships with them. They aren’t just a number to us.”

Sisniega said the constant motivation she and her fellow Miners received from UTEP faculty was vital in their success at Boston University (BU).

Once accepted into the EMSSP, students enroll in six weeks of courses at BU the summer before their junior year and eight weeks of coursework at BU, including a formal Medical College Admission Test (MCAT) preparatory course, before their senior year. They take a combination of undergraduate and graduate-level courses at BU as seniors. The students retain degree candidacy at their home institutions as they participate in individualized programs of study at BU that satisfies the undergraduate academic requirements and lay the foundation for first-year medical school curriculum. Students who perform at the prescribed level matriculate at BUSM the next academic year.

“When I was going through the process, I was never let down,” Sisniega said. “The professors, the advisers, everyone at the MPI really made sure I was on track.”

But getting through medical school presented a loftier challenge. Brenda García said she rarely struggled with her classes before her first year as a medical student. The intensity she encountered early into her stint in Boston resulted in a setback.

“The first year of medical school was probably one of the hardest times for me,” she said. “I actually had to retake one of my first-year classes. I believe I grew a lot after this. It ended up being a positive learning experience about adapting and being resilient, which helped me a lot throughout the rest of med school.

“At first, it was intimidating knowing that some of your classmates had come from Ivy League schools. There was some self-doubt. Over time, I came to see that it didn’t really matter where you came from and, at the end of the day, we were all in the same class and going through the same things. I think study habits that I had formed as an undergrad were helpful and I also knew the importance of having interests outside of studying.”

“It’s really nice to see other people from your college do well,” she said. “To be such a majority of the graduating EMSSP class, it shows we learned to be very resilient. I look at students in the program who came after me and I can see the UTEP students are on top of their game, making up a majority of the program. I think it adds a lot of merit and shows what opportunities are available to students at UTEP.

“More importantly, this was a difficult process. But we knew we could always count on each other for support. Going into this program, I knew I could count on the UTEP students who were years ahead of me, just like we always offered help and advice for the students in years that came after us. I think this program created an amazing network where UTEP students at BU can find unconditional support for each other.”

Sisniega has since begun her residency at The Mount Sinai Hospital in New York, where she will focus on neurology. Brenda García is an internal medicine resident at Mount Auburn Hospital in Cambridge, Massachusetts, and Oscar García, no relation to Brenda, is an internal medicine resident at Dell Seton Medical Center at The University of Texas at Austin.

“That’s exciting to see,” Garza said. “We are seeing student success through the MPI, and through this program.”