Growing up, Rene Miranda dreamed of becoming a firefighter or a paramedic. Despite his early fascination with constructing objects out of Legos and a natural curiosity for mechanics, becoming an engineer was far from his mind. But during a visit to a college open house while a high school senior, Miranda discovered The University of Texas at El Paso’s College of Engineering and quickly altered his career aspirations.

In spring 2018, Miranda graduated from UTEP with a bachelor’s degree in mechanical engineering and eagerly returned to the University to further his education. As a graduate student, he began working as a research assistant at UTEP’s NASA MIRO Center for Space Exploration and Technology Research (cSETR), which was a pivotal experience that solidified his interest in the aerospace industry.

cSETR was established in 2009 through a $5 million investment from NASA and evolved into one of the most prolific aerospace research and education programs in the nation aimed to train a diverse future aerospace workforce. Since its inception, cSETR has boasted an extensive roster of graduates who credit their participation with the center for their success in the highly competitive aerospace industry, with many claiming positions at high-profile aerospace and defense organizations.

Recently, NASA’s Minority University Research and Education Project (MUREP) Institutional Research Opportunity, or MIRO, awarded renewal funding for the third time to sustain and support cSETR, enabling the center to continue its trajectory of research and education efforts to further increase capabilities of students and position them as contenders in the aerospace and energy engineering industry.

“A significant differentiating aspect of cSETR in comparison to other national aerospace research programs is its continued focus on student success,” said Ahsan Choudhuri, Ph.D., associate vice president for aerospace center and founding director of cSETR. “It exists for students.”

The primary underpinning of cSETR’s vision is to provide students, particularly those from the Paso del Norte region, access to unprecedented aerospace career opportunities and upward social mobility.

The success of UTEP graduates is not only an advantage for the graduates but mutually benefits society by helping change the landscape of the aerospace and defense industry to reflect a more diverse 21st century demographic.

UTEP alumna Marissa Garcia landed her dream job even before graduating from the University. She said the education and training she received from UTEP and cSETR primed her to receive job offers from multiple high-profile aerospace companies. She currently serves as a liquid propulsion engineer at NASA Marshall Space Flight Center in Huntsville, Alabama.

“cSETR provided the environment and research for employees to get hands-on experience with propulsion systems,” Garcia said. “Along with developing your design, analysis and testing skills, you also build your communication abilities. There are even opportunities to network with full-time NASA employees at bi-weekly/monthly tag-ups. Not to mention participating in a NASA internship at one of several NASA centers to gain that NASA experience. Obtaining a NASA internship is not an easy feat, but cSETR helps get your foot in the door.”

UTEP mechanical engineering doctoral student Mariana Chaidez recalls spending much of her time growing up stargazing and often wondering what might exist in the vastness of space. She knew she wanted to be part of the effort to expand human space exploration to gain new knowledge about the galaxy, but the path to make it happen seemed too daunting.

Recently, the first-generation college graduate made her lifelong dream a reality and accepted a positon with top aerospace company Blue Origin, an achievement she says was made possible through the knowledge and training gained through cSETR.

“Since a young age I knew that I wanted to go in the aerospace industry, but never knew exactly how,” Chaidez said. “As I became more involved in the center, I began to understand what career path I wanted to take. I began to notice that I enjoyed working with rocket engines and the fast-paced rhythm of a test site. Without the opportunity to be exposed to this environment so early on in my career, I would not have come to realize that this was the career path I wanted to pursue.”

Choudhuri said cSETR has no plans to slow down any time soon but rather expand efforts to provide even more opportunities to students by increasing engineering and technical jobs in the Paso del Norte region to help retain UTEP’s talented pool of engineering and science graduates.

Like the many UTEP graduates who have launched successful careers in aerospace through their involvement in cSETR, Miranda remains grateful for the center that helped unlock opportunities and his potential to achieve more than he thought possible.

“Having a hands-on experience and exposure to a rocket-testing facility and theoretical background allowed me to be a top candidate for the aerospace industry,” Miranda said. “I have been fortunate enough to have multiple interviews, and when it comes to sharing my experience, the response has always been very positive and impressed by the level of knowledge and exposure I have while still being a student.”

“It is with great excitement that I am looking forward to this new stage in life,” he said. “I plan to continue to learn and get exposed to rocket science in an industry level and grow myself to be a more knowledgeable engineer. UTEP and cSETR laid a strong, solid foundation that brought me to where I am today.” 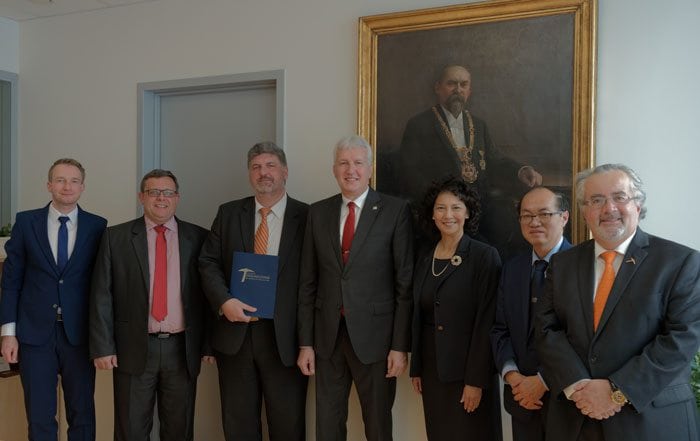