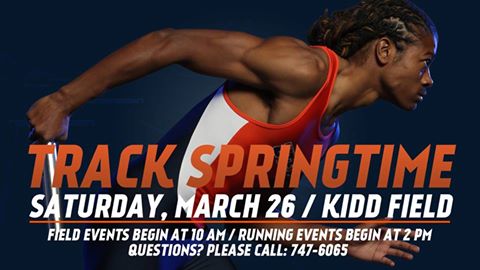 The UTEP men’s and women’s track and field teams will spring into action this Saturday at the UTEP Springtime in Kidd Field.

UTEP will host only one other home meet (UTEP Invitational/April 30th) during the outdoor slate. The Conference USA Championships will take place this May in Murfreesboro, Tenn. The Miners will compete at the Texas Relays (March 30-April 2), Sun Angel Classic (April 8-9) and Brutus Hamilton Challenge (April 22-23) to round out the regular season.

32 athletes (14 men and 18 women) will compete this weekend for the Miners at the UTEP Springtime. The throwing events are set to begin at 10 a.m. and the running events will start at 2 p.m.

2015 Second Team All Amerinan Samantha Hall will be redshirting in 2016. Hall finished 13th last year at the NCAA Championships in the discus throw and is the school record holder.

The Miners will have a slew of athletes competing in the 100m and 400m hurdles. On the men’s side, Sven Zellner will be the lone Miner running the 110 hurdles while Yinka Oyebanjo-Odofin and Tommy McCoy will be running the 400m hurdles.

On the women’s side, Tobi Amusan, Bria Love, Lucia Mokrasova, Rebecca Oshinbanjo and Brittney Trough will all lineup for the 100 hurdles. Trought will also run the 400 hurdles along with Yanique Bennett, Dreshanae Rolle and Brittney Adams.

Isak Washington will be the only male sprinter to compete in the 100m/200m dash double. Carnell Horn (200m dash), Asa Guevara (400m dash) and Carvellion Horn (400m dash) will round out the sprinters.

The trio of Cosmas Boit, Daniel Cheruiyot and Evans Kiprono will compete in the 1,500m run for the men and Gladys Jerotich and Winny Koech will complete the distance for the women.

Both Fayon Gonzales and Adebola Akomolafe will be throwing the hammer and the discus. For the men, Kevin Rincon will be heaving the javelin and hammer.

Truphena Sum, Daniel Tarango and Esteban Montanez will be clocking the 800m run and Kayla Pallares will run the 5,000m race.

Live results will be available at www.spato.us