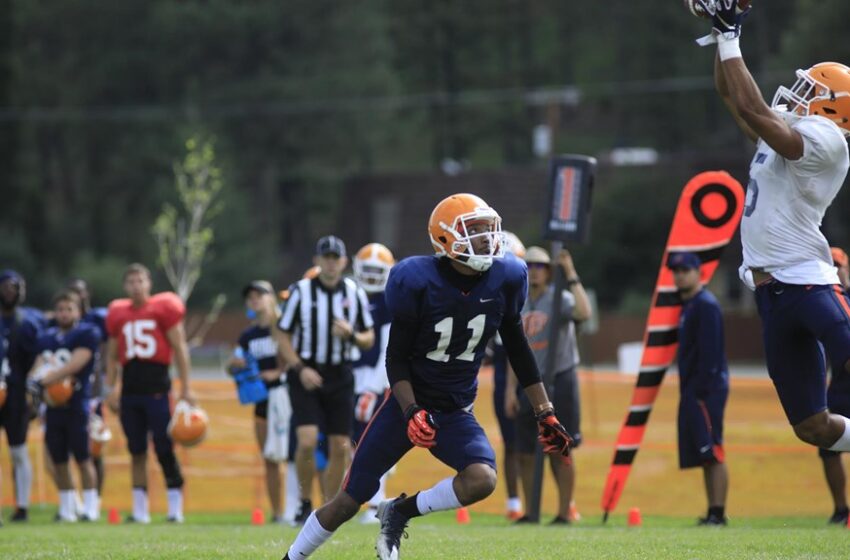 The UTEP football team conducted its final practice of Camp Ruidoso on Saturday morning, concluding matters with a 47-play scrimmage.

“I was pleased to get the work in,” head coach Dana Dimel said.  “I thought it was good work.  We needed to tackle.  We needed to get our fits on offense, get our fits on defense.  And I thought we did a good job with all that.  We got to work on substitutions and the kinks that you get in a scrimmage with a time clock.  Having the officials there is really, really important for us because we did a lot of different things offensively, and the officials were judging all that and making sure that we were clean.  It was a pretty clean scrimmage.  We only had one penalty on offense and one penalty on defense, so I was happy with that.”

The Miner offense reached the end zone on a couple of occasions, as Ryan Metz threw a 50-yard TD pass to Terry Juniel and Treyvon Hughes rambled for a 28-yard rushing score.  Jason Filley connected on a 36-yard field goal to complete the scoring for the blue team.

“I thought Kai had a nice scrimmage, I thought he did some nice things,” Dimel said.  “I thought Metz did a really good job of getting the guys orchestrated in and out of huddles.  Kavika Johnson stepped up and did some nice things.  The number one offensive line did a good job.  The number one defensive line played really well.  I took them out early because I didn’t want to get anyone banged up.  And of course our number one defensive backfield did a good job as well.”

Juniel led all UTEP receivers with 58 yards on a pair of catches, and Johnson chipped in with two receptions for 30 yards.

A.J. Hotchkins, Mike Sota and Ray Walters each registered a sack, Chris Barnwell had a forced fumble and fumble recovery, and Nik Needham picked off a pass as the secondary continued to steal the show on defense.

“They’ve had some nice turnovers throughout camp,” Dimel said.  “We know that’s probably one of the strengths of our defense right now.  There is a lot of experience back there and some talented players.  We had the New York Jets’ top scout come in early in practice to look at Winston [Dimel] and a couple of our guys on offense and three of our guys on defense.  It says something about some of the talent that we have.”

Needham tied for the team lead with four tackles on Saturday.

The Miners will return to El Paso on Sunday and have their next practice on Monday morning, with the season opener versus Northern Arizona (September 1) a mere three weeks away.

Dimel said the team accomplished its goals in Ruidoso.

“During camp, I wanted to really start working on our two deep,” he said.  “As a head coach, that’s what you think about all of the time.  Of course you think about your starters, but you don’t ever go a day without thinking about your backups too and how good you’re going to be so you can handle the injuries that occur throughout a season.  The thing that I’m most pleased about is our recruiting class that we brought in.  A lot of those guys are just what we hoped they’d be.  And that’s not usually the case in recruiting.  But they are.  And so there’s a group of them that are giving us the depth that we need to have.  That’s really encouraging.”

Dimel said the team’s focus will be on mechanics over the next few weeks.

“We’ve started to break down NAU,” he said.  “We have some good summer scouting reports put together on them.  On the bus trip up here, I watched them for a couple of hours and we’ll watch them again on the bus trip home and really start locking in on a game plan in the next five or six days.  Our philosophy has always been to put in everything in camp, to insert it all and get it all out there so when we get into a game we can say ‘Remember guys, we’ve already done this.’”

The two deep is taking shape.

“I still think there is really good competition at the linebacker position,” Dimel said.  “That’s a position that we said we really needed to work on and get better.  I think guys have stepped up and done a nice job.  And of course the quarterback position, it’s not necessarily a battle amongst the two of them but a battle for them to continue to get better and continue to handle all of the mechanics of running our offense.”