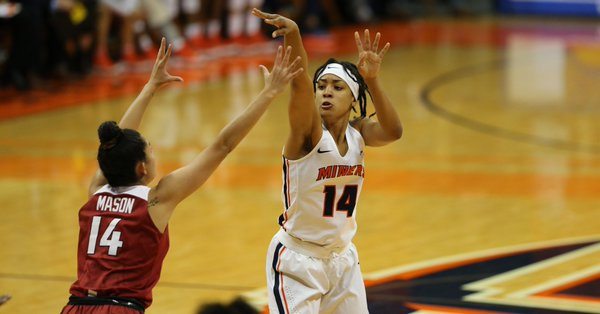 The Huskies (2-4) led 31-26 at the half but the Miners (5-1) came alive after the break to post the come-from-behind win to close out the season-opening six-game homestand in style. The game featured eight ties and seven lead changes, with the final one coming down the stretch when UTEP peeled off nine straight points-all on treys- to turn a one-point deficit (57-56) into their largest lead of the contest (65-57). HBU scored the next five points but the Miners put the game out of reach with a Jordan Alexander jumper with 21 seconds to play.

“Our energy wasn’t very good in the first half and Houston Baptist really punished us for that,” UTEP head coach Kevin Baker said. “They played well and built a lead. We really challenged them hard in the locker room at half time. Our kids really responded to that. I’m really proud of our team. I wish we would have played a little better quarters one through four but I’ll certainly take their energy and activity that they played with in the fourth.”

Sophomore Roeshonda Patterson provided a spark off the bench with a career-high matching 11 points to join Howell and Seda in double figures. Freshman Jordan Jenkins pitched in a personal-best six points to go along with six assists.

The visitors jumped out to an early 6-3 lead before UTEP responded with a 9-1 run to secure a 12-7 advantage with 4:01 to play in the first quarter. The Huskies quickly cut the deficit to one (12-11) but UTEP finished the period strong and led 17-11 through 10 minutes of action. The Miners connected on 63.6 percent (7-11) from the floor in the frame, with six assists on their seven field goals.

It was a different story in the second quarter, with the visitors turning up the heat defensively while finding some rhythm on offense. The result was a 20-9 frame in favor of HBU, which included a 13-2 surge late in the half to grab a 31-23 advantage. UTEP ended the run with a high-arching 3-pointer from Patterson that made it a 31-26 game at the half.

The deficit remained five (38-33) with 6:19 to play in the third quarter before UTEP started to slowly but surely claw its way back into the game. They did so at the free-throw line, going 10-12 in the quarter on the way to evening the score (45-45) heading to the fourth quarter.

Katarina Zec drilled a long triple at the start of the final frame to give the Miners their first lead (48-45) since the first half. Faith Cook followed that with a pull-up jumper and suddenly the home side led by five (50-45). HBU struck back with a 5-0 run of its own to forge the seventh tie of the tilt.

After the Huskies snuck back into the lead (57-56), UTEP answered with three straight triples to fuel a 9-0 run and vault ahead by a score of 65-57. Jenkins sunk the first one before consecutive treys by Howell.

HBU wasn’t done, though, using a layup by Johnson and a 3-pointer from Britta Daub to make it a one possession game (65-62). The Orange and Blue kept their composure and ran a good set to give Alexander a wide-open look from the wing. She drilled the jumper, affording the Miners some much-needed breathing room (67-62) with 20 seconds remaining in regulation.

UTEP got a couple stops down the stretch and a sunk two more free throws to close out the contest in style.

The Miners will return to action at Arkansas State at 4 p.m. MST Tuesday. It is the first road contest of the year for the Orange and Blue and fans may stay informed by following @UTEPWBB on Twitter for timely updates