MURFREESBORO, Tenn. – The UTEP soccer team put together one of its best performances of the year in a commanding 4-1 win at Middle Tennessee Sunday afternoon.

Sophomore Alyssa Palacios recorded four saves while also intercepting a couple of potentially dangerous services into the box to help key the efforts for the defense. It is the second straight comeback win for the Miners, who were playing a split weekend (one home game, one road game) in conference action for the first time since 2002 when they were members of the Western Athletic Conference.

“I am so proud of UTEP Soccer,” UTEP head coach Kevin Cross said. “I do not know if we have ever had a bigger response from going down a goal. That was amazing to score four goals after being down one. We can play with anyone in Conference USA when we work and bring our top game which is what we will need against a very good Marshall team on the road on Thursday.”

Middle Tennessee came out strong on its “Senior Day” game, testing Palacios early. Amber Hoot sent a shot off a free kick skipping in on net but the netminder was up to the task. Three minutes later MT had another free kick, and this time it capitalized with Jordan beating Palacios after a scramble for a loose ball.

UTEP quickly huddled up as a team after conceding the goal, and it played with determination the right of the way. The Miners peeled off four straight goals, including three in a seven-minute span, to grab control of the contest for good.

Lindsay’s goal, her first of the year, was a game changer. After a couple of close calls, including a shot off the crossbar by Chaudhary, the senior used a brilliant strike to best MT GK Celeste Barnard inside the right corner post of the net. The tally pulled her squad even, and gave it a renewed sense of confidence.

The Miners, who were noticeably energized, pulled ahead just six minutes later. Mullen sent a ball to Chaudhary, who rifled it into upper 90’s country and past the outstretched hands of Barnard. Before the Blue Raiders could regroup, UTEP made it 3-1. In a beautiful sequence of passes being strung together, Crenshaw found herself alone on top of the goal and tapped it home.

Carreon capped the sensational response with her first collegiate goal to make it a very special birthday. With time winding down in the first half, Valentine crossed it to a cutting Carreon. The freshman buried to shot to beat the clock and afford the Miners a 4-1 lead at half.

UTEP played with poise and composure in the second half. The Miners were smart with their ball possession and positioning to close out the contest in style. The home side managed three shots on goal over the final 45 minutes of action, each of which were easily handled by Palacios.

UTEP will have a quick turnaround by playing at Marshall at 5 p.m. MDT Thursday. 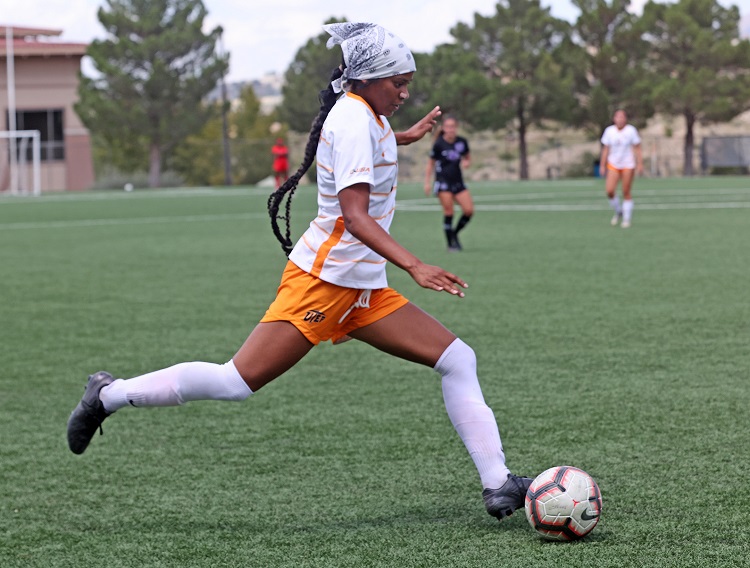