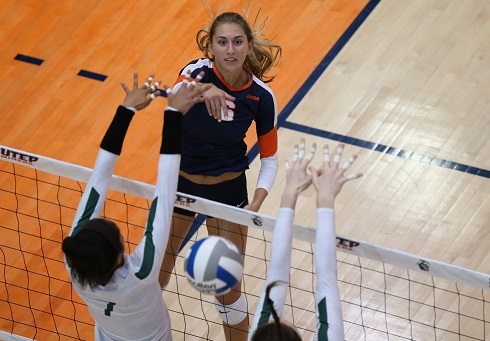 Behind a combined 10 kills from Macey Austin, Briana Arellano and Kylie Baumgartner, the UTEP Volleyball Team rallied to take a 25-23 set three victory, but fell to LA Tech in four sets on Friday at Memorial Gym.

The Lady Techsters took sets one and two (25-22, 25-19) before the Miners got the third set victory from six kills from Austin and three apiece from Arellano and Baumgartner. LA Tech would go on to take set four (25-22) and the match 3-1. The Miners fell to 1-9 in Conference USA play, 4-19 overall, while the Lady Techsters improved to 2-8 in C-USA and 7-17 overall.

“It was a disappointing match for us today,” head coach Holly Watts said. “We didn’t play with enough energy for long enough. We served them tough on a couple of plays, but we weren’t consistent with our effort today.”

Austin earned her 10th double-digit kill match in a row after hammering 16 kills to lead the team, while freshman Mallory Yost was close behind her with 11 kills of her own. Yost also had a team-high five blocks, including a solo block, and a career-high four digs. Arellano and Baumgartner each had eight kills, while Arellano also recorded eight digs and two service aces and Baumgartner tallied four block assists. Amanda King notched 38 assists and Ashley Grzebeniak paced the Miner defense with 11 digs. Dania Orozco led the team with three service aces and picked up five digs.

The Miners and Lady Techsters were evenly matched in set one, tying 10 times before a 5-1 run by LA Tech brought them up 23-20. Austin found the hardwood with authority consecutive times to force a timeout from the visitors as their lead was cut to one, 23-22. LA Tech’s Marta Monne notched a kill to bring set point and a Miner attack error ended the set 25-22 and gave the Lady Techsters the 1-0 match lead. Austin led the Miner offense in set one with five kills of the team’s 10 set total.

Set two saw a 7-2 run from the Miners, with three kills each from Yost and Austin to give the team momentum. The Lady Techsters would score six unanswered points, however, to get back in the match and gain the 14-13 lead. Baumgartner’s first kill of the set would stop the run, but another short run kept the Lady Techsters up 17-13.

The Miners would see kills from Maddie Morgan, Cheyenne Jones and Austin and benefited from LA Tech attack errors, but set two would go to the Lady Techsters 25-19.

The Miners would stop a sweep, pushing a 5-0 run behind three kills from Austin and a kill each from Arellano and Baumgartner to get a 14-10 lead. LA Tech’s Madeline Davis would get a point, but another 4-0 run would balloon UTEP’s lead to 18-10.

An 11-2 run by LA Tech would keep them in the set and give them the 23-22 lead before King and Yost teamed up for a block assist and tied the set. The Miners then had a small block party with Arellano and Baumgartner stopping the Lady Techster attack for UTEP’s set point, and another block assist by Baumgartner and Ali Vidali ended the set 25-23. The Miners had 10 block assists in set three alone.

The conference foes would exchange points in set four before the Miners pulled away to a 10-6 lead. The Lady Techsters did not back away however, rallying to tie the set at 18. Yost and Baumgartner matched LA Tech’s Gina Cortesi’s kills, and a LA Tech service ace was followed by another block assist by Baumgartner and King to keep the set close, but still in the Lady Techsters’ advantage at 21-20.

Arellano’s clutch service ace would tie the set, but three consecutive kills by LA Tech would force a UTEP timeout at the visitor’s set point. Out of the timeout, LA Tech’s serve would go into the net, but they would find the hardwood the next play to end the set 25-22, and the match 3-1.

“This team won’t quit and we battled back in the third set to get us back in the game,” Watts said. “The season isn’t over yet for us, so we still need to bounce back and get ready for the next one.”

The Miners will face Middle Tennessee on Sunday in Memorial Gym. First serve on Senior Day is slated for noon.