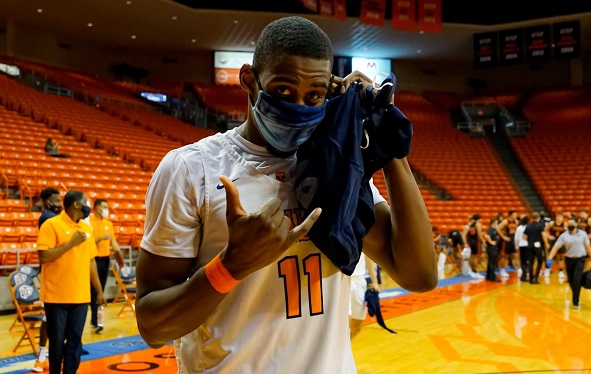 TEMPE, Az. – It was a tale of two halves, as the Miners were down eight points at halftime before outscoring the Arizona State Sun Devils 43-22 in the second half, en route to a huge road win 76-63.

Bryson Williams and Souley Boum combined for 27 points in the second half.

“I’m really proud of my team,” third-year UTEP Head Coach Rodney Terry said. “Their preparation this past week had been good and spot on. This is a great group to work with, I love this team. They come to practice every day and do all the things you ask them to do.”

Williams finished with 22 points on 9-of-16 shooting and 10 rebounds, while Boum tallied 18 points with six rebounds and three assists. Tydus Verhoeven came up with big numbers, scoring a career-high 10 points and grabbing a career-best tying nine rebounds with a steal and blocked shot.

UTEP (3-2) crushed Arizona State (4-3) on the boards, 46-26, while grabbing nine offensive boards led by Verhoeven’s four offensive grabs. It was a big improvement after being outrebounded by Arizona, 46-25, last Saturday.

“We did a really good job on the glass. Tydus was a beast on the glass,” Terry said. “I thought Bryson got some big rebounds for us as well. But our guys really came in a rebounded the ball well.”

The Miners’ road victory versus a Power 5 program was the second in the last 20 years. UTEP’s last road nonconference win came at Washington State on December 21, 2013, and it was the first win in Tempe since December 22, 1983.

UTEP is also the first Conference USA team to defeat a Power 5 program this season.

“It was a great road win tonight and a great win for our program,” Terry said. “We’re growing and trying to build.”

Down 41-33, UTEP came out of the second half on fire as Boum hit back-to-back threes, while following with a trio of free throws to give the Miners a one-point lead (42-41).

“We had 10 turnovers at the half and I said, ‘hey guys, we played the half with this team, and we’re the best team, but we have to go out there and take the win’”, Terry added. “They were scoring a lot in the first half off turnovers and the guys buckled down and took care of the ball.”

After Josh Christopher tied the game at 53 on a driving layup, Keonte Kennedy answered with a three-point bucket. The Miners never looked back at they built the lead to 10 points (66-56) with 8:20 left in the game. Martin got ASU within five points (68-63) at the 5:34 mark on a driving layup after a turnover. But UTEP would keep its lead in tact when Christian Agnew connected on a pair of free throws, Williams connected on back-to-back buckets on a dunk and hook shot, and Verhoeven’s fifth field built the lead to 13 points.

“We did a really good job tonight of finishing possessions,” Terry said. “We talked about taking our defense to another level just finishing possessions and not giving second-chance opportunities. The zone [defense] was a good changeup and we stayed out of foul trouble. We needed to change the rhythm. They were starting to get into a rhythm and starting to drive the ball and about to be in the bonus situation. We wanted [Arizona State] to shoot contested shots and try to block them out.”

Agnew, a transfer from North Alabama, made his UTEP debut after transfers were named immediately eligible by the NCAA earlier Wednesday afternoon. He finished with five points, two rebounds, an assist and steal.

UTEP shot 48.3 percent, including 50.0 percent in the second. The Miners also shot 90.0 percent from the foul line.

Christopher led all scorers with 24 points and led ASU with six boards, while Alonzo Verge Jr. tallied 13 points. The Sun Devils shot 40.0 percent from the field, and went cold from beyond the arc, only making 1-of-18.

Up next, UTEP will return to the Sun City to host Benedictine University at Mesa on Sunday, Dec. 20. Tipoff is set for 4 p.m.

Fans will not be permitted, however the Miners and RedHawks will be televised on The El Paso-Las Cruces CW and streamed on CUSA.tv. The game can also be heard on 600 ESPN El Paso with “The Voice of the Miners” Jon Teicher calling the action.