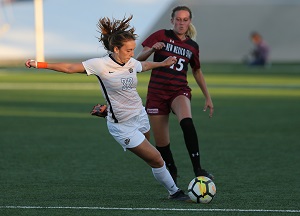 “It is crazy how fast our season goes and that we are playing our last two home games on Thursday and Sunday,” UTEP head coach Kevin Cross said. “We played with the most energy on the road versus LA Tech and Southern Miss. We are looking forward to showing our fans how hard we can play this week during these two games. We have two excellent teams coming to town that we have a lot of respect for.”

Thursday will feature “Pink Out Night.” Fans will receive $2 tickets for wearing pink to the game, showing support for Breast Cancer Awareness for the month of October. UTEP soccer will honor its seniors on Sunday on “Senior Night”.

“Thursday is a big game for me personally as it is our Pink Out game in support of Breast Cancer Awareness. My mom, whom I dearly love, is battling breast cancer now, and even has her cancer scans this week, so this game has extra meaning to me,” Cross said. “On Sunday we will say goodbye to five awesome seniors for Senior Day, and play a very good Old Dominion team. We look forward to closing the home season in style playing our very best soccer. We have really appreciated everyone’s support of UTEP soccer this season. We are thankful for the great dedication and hard work of our great seniors, Alyssa Palacios, Carleigh Simmons, Payton Ross, Sheridan Smith and Jodie Enokson.”

Series History Vs. Charlotte
UTEP has face the 49ers five times in program history, compiling a record of 2-2-1. The last meeting came in 2017, with the Mines getting a 1-0 win at home.

Getting To Know Charlotte
Charlotte is coming into Thursday’s match having dropped three of its last four games in conference play. The 49ers have tallied 22 goals on the season. Junior Megan Greene leads the team with seven goals in 14 games.

Series History Vs. Old Dominion
The Miners have faced ODU a total of four times in program history, with the last meeting coming in 2017. UTEP holds the edge with a 2-1-1 record.

Getting To Know Old Dominion
ODU has won three of its last four contests, including a draw against FAU on the road. Old Dominion have registered 22 goals in 15 games, Morgan Hall leads the team with five goals. ODU battled to a 1-0 loss against No. 14 Duke on the road.

Miners In Conference USA
The Miners moved up to the No. 12 spot in the league standings with four points, needing six points to tie ODU (10 points) to tie for the last playoff spot. UTEP holds an all-time conference record of 66-57-12.

Strong Across The Board
UTEP has demonstrated that it works as a team with 11 players accounting for 26 goals. Lauren Crenshaw leads the team with six goals on the season. Vic Bohdan follows with five, Anna Jimmerson has netted three, April Pate, Jojo Ngongo and Natalie Valentine all have scored two, while Danielle Carreon, Cayla Payne, Carleigh Simmons, Jackie Soto, and Hayley Vaughan have contributed to the offensive.

The Game Plan
The Miners have started their matches defensively strong. They have given up only nine goals in the first-half action this year. UTEP has put its attack to the test in the second half, scoring the majority of its goals after the break (16 of 26).

Palacios & The Career Rankings
Senior GK Alyssa Palacios has compiled some staggering numbers her career in the Sun City. The result has been her stamping her name throughout the UTEP career record book. The Texas native holds the most career shutouts in program history (21), surpassing Sarah Dilling (2011-14). She enters Thursday’s match currently ranked second in saves (406), save percentage (0.825), third in GK wins (37), GK games started (73), saves per game (5.56), GK minutes played (6,688:52), fourth in GK matches played 73) and fifth for goals against (1.26).

The Basic Facts
UTEP is in its 23rd season as a program, boasting an all-time of 254-171-31. The Miners are under the direction of 18th-year head coach Kevin Cross who sports a mark of 211-124-23 in that time frame. He is assisted by two former Miners (Heather Clark and Jessie Pettit).

A Maturing Roster
In 2017, 20 of the 27 members of the squad were underclassmen, so its only natural that this year’s squad has a bit more experience. In 2018, the Orange and Blue feature a unit where 14 of the 23 individuals are either freshman (seven) or sophomores (seven). There are four junior and five seniors who are providing leadership for the still relatively young group.