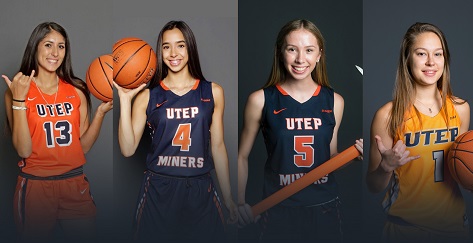 A brief profile on each of the signees, along with a quote from Baker, is below.

Hometown talent who is starring for Franklin High School … tabbed as Texas Girls Coaches Association All-State as a junior and senior … played in the 2018 TGCA 5A-6A All-Star Game … early on in her senior season she is pouring in 27.0 points per game along with 7.8 rebounds per contest, 4.3 assists per game and 4.5 steals per game … put up 19.5 ppg, 6.4 rpg, 4.2 apg and 3.5 spg as a junior … effort helped her team take the district crown in Class 6A for the second straight year … garnered the Co-Most Valuable Player of the Year Award in the El Paso Times’ postseason honors … accounted for 16.3 ppg, 4.3 apg, 4.0 rpg and 3.3 spg to assist Franklin in taking home the district crown … as a four-year letter winner for Franklin, she has averaged 14.7 ppg, 4.7 rpg, 3.6 apg and 3.0 spg in 100 games played … gained experience on the international level as well … in summer 2018 played for Mexico in the FIBA U18 Americas Women’s Championship in Mexico City … provided 8.8 ppg, 4.0 rpg and 3.2 apg in 15.8 minutes per contest against world-class talent … reached double figures in scoring in four of her six games played … previously represented Mexico with the FIBA U16 Women’s America Championships in Buenos Aires, Argentina.

“Katia is a very special point guard. She has tremendous court vision, she can score off the dribble, shoot the three, and defends with great energy. She has the ability to make plays that aren’t there at times. She can create plays off the dribble for her teammates but can also score in clutch moments. She is one of El Paso’s own and we think she can be a fantastic Miner.”
UTEP women’s basketball head coach, Kevin Baker

Three-year letter winner and three-time district champion for Sachse High School … has helped the team go undefeated in district play in each of those seasons … as a junior she was instrumental in helping the team advance to the state tournament for the first time in school history … voted as the 10-6A MVP after leading Sachse in scoring (14.2 points per game, while also adding 3.9 rebounds per contest and 2.9 assists per game) … contributed 15 ppg, 3.5 rpg and 3.2 apg as a sophomore … named Texas Association of Basketball Coaches All-State as a junior … tabbed All-Region and All-District honoree as a sophomore and junior … was honorable-mention All-District as a freshman … also a standout in track & field.

“Avery is a great all-around basketball player. Most people see Avery as just a great shooter. She definitely can shoot the ball. But, in fact, Avery is a complete player. She makes solid decisions off the dribble, is a terrific passer, and guards people intelligently. Her basketball IQ is very high, and that comes from being a coaches’ kid. Avery is an El Pasoan at heart and we know she will be a crowd favorite at UTEP.”

Helped Teays Valley Christian to a 16-10 mark in 2017-18, putting up 13.3 points per game to go along with 7.5 rebounds per contest, 2.9 assists per game, 2.3 steals per contest and 1.4 blocks per game … shot 51.1 percent from the floor, including 30.1 percent from 3-point range … drained 69.3 percent of her tries at the charity stripe … led the school to the West Virginia Christian Athletic Tournaments state title, erupting for 26 points in the championship game … scored 17 points against Westridge Academy (USA Today #14) … garnered all-tournament honors for the WVCAT State Tournament … competed with a club team at the seventh-annual USJN Three Rivers Challenge in May 2018.

“Arina is a very talented player that can play many positions on the floor. Arina is a great shooter, can score by attacking the rim, and can guard any position on the court. She is a bigger guard and this will cause matchup problems for people that try to guard her. She has great basketball smarts and knows the game. Arina has a strong work ethic and will put in the extra time in the gym to become a great player. We are very excited about all that she brings to our program.”

Has been a member of the varsity basketball team with Carondelet High School since her freshman year … helped lead her squad to the 2018 girls North Coast Section Division 1 title, winning 71-58 against Heritage … scored 10 points in the championship game … it marked the third straight NCS Championship for Carondelet … overall put up 15 points per game while shooting 40 percent from the floor and 70 percent from the charity stripe … rated as a three-star recruit by ProspectsNation.com … also a letter winner for the varsity softball team.

“Tatyana is a forward that can score in a variety of ways. She can shoot the three, score with her back to the basket, and she can get to the rim off the dribble like a guard. Because of her guard skills, she can also stretch a defense. She always competes hard on the glass and gives our team a little size inside. Tatyana has a unique skill set for a forward and we are confident that she can make an immediate impact on our team.”