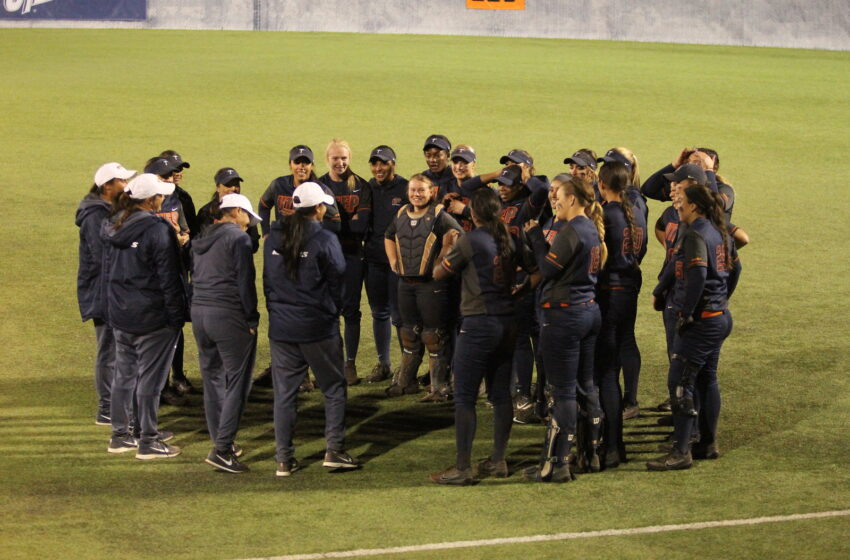 Kira McKechnie won her third collegiate game, while picking up her first hit and RBI as the UTEP softball team run-ruled Portland State, 9-1, and Mariah Ellis drove in the go-ahead run during the second contest and the Miners (6-7) got by Idaho State, 4-2, on the first day of the UTEP Tournament at Helen of Troy Softball Complex on Friday night.

“The first win, it’s always nice to run-rule a team,” fifth-year UTEP head coach Tobin Echo-Hawk said. “I think our pitchers did a great job keeping us in the ball game and our hitters came through in timely situations.”

UTEP 9, Portland State 1 [5]
Courtney Clayton drove in three runs, including a pair that she drove home during the bottom fifth to clinch the victory against the Vikings during a four-run fifth. Kacey Duffield and Ariana Valles each registered an RBI during the victory-clinching frame.

The Miners jumped on the Vikings in the first inning when Cortney Smith and Pamala Baber drove in runs. The game commenced when Ariel Blair drew a leadoff walk and Kaitlin Ryder singled. Smith connected on a hard hit up the middle that plated Blair and Baber used a one-out bunt single to score Ryder for a 2-0 advantage.

Two more runs crossed the dish when starting pitcher McKechnie was inserted as a pinch hitter and recorded her first career RBI on a two-run single hit through the right side, giving her squad a 4-0 lead. McKechnie (3-2) was also effective in the circle, throwing 3.0 innings, allowing only two hits, walked three and struck out three. Devyn Cretz finished the contest, hurling 2.0 frames, allowing one hit, zero walks and tallying a K.

The Miners picked up their fifth run in the fourth. Blair drew a walk and stole her team-leading fourth base. Ryder advanced Blair to third on a bunt single. Blair scored her second run when Clayton drove her home on a sac-fly hit to center.

Smith finished 2-for-3, while Baber went 2-for-2 with a run and RBI. Ryder also finished 2-for-2 and drew a pair of walk and scored a run. Freshman Brianna Hill drew a walk and stole her first career base.

UTEP 4, Idaho State 2
With the score tied 2-2 after Emma Bordenkecher drove in a pair of runs in the top third, the Miners responded with two of their own in the home half.

Clayton led the third off with a single to right and Baber doubled on a blood placed in shallow right center. Duffield then reached on an error to load the bases to set up Ellis’s pinch-hit opportunity, in which she took full advantage on a first-pitch hard knock up the middle that plated Clayton. Freshman Ilena Santos reached on an error, but was credited with an RBI when Baber crossed the dish.

“As far as the second game, it was just a scrappy game, going back-and-forth,” Echo-Hawk added. “It wasn’t pretty and I don’t think we hit very well, but we found a way to score four runs. I think Idaho State, after losing 18-0 to NM State [earlier in day], they tried to prove a point and they’re better than their record indicates.”

The Bengals made a threat in the fifth after three consecutive walks loaded the bases by McKechnie. Cretz came in relief and forced the first out when Aubrey Creekmore reached on a fielder’s choice after Haley Harrison was thrown out at home plate. But the big play of the night was when UTEP turned its eighth double play of the season. Frankie Tago put the ball into play, as Duffield threw out the runner at home, Ryder then whipped the ball to Clayton for the third out to end the threat.

“[The double play] was a huge, huge play,” Echo-Hawk said. “Kacey was heads up throwing home, and Ryder trusted that Courtney Clayton was going to be there, because that’s a boom-boom play. You have to trust your teammates. They did a great job getting us out of that inning. If we don’t get out of that inning, the game is a lot different.”

Julia Wright (1-2) got the nod in the circle, winning her first Division I game after throwing 4.0 frames and striking out four in the process. Wright allowed five hit and only walked one. Wright has thrown 10.0 solid innings her last three outings, while tallying 13 K’s and only two walks. Cretz earned her second career save after throwing 3.0 innings, walking none and striking out a pair, which included back-to-back K’s looking for the first two outs during the top seventh.

“Our pitchers did a good job,” Echo-Hawk said. “Julia held us in the game, and I know Kira struggled, but that’s a pitching staff. When one struggles, the other ones have to pick up the slack and they did that.”