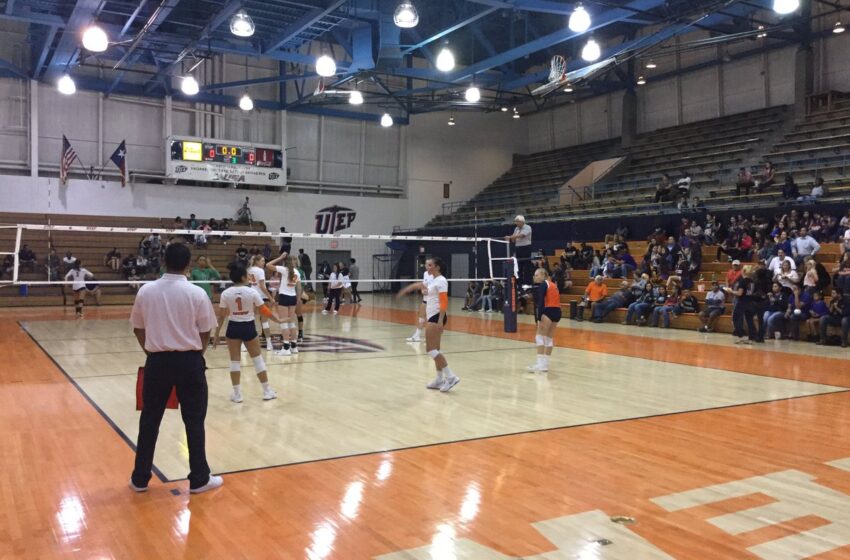 The UTEP Volleyball Team came out firing to take set one, but could not hold on as the league’s second-ranked team in North Texas took the four set victory on Friday at Memorial Gym.

“We really competed against a very good team today,” head coach Holly Watts said. “I’m really proud of our team’s effort, we did the things we worked on in our game plan. There’s just a few adjustments we need that can make the difference.”

C-USA’s ninth-ranked hitter in Macey Austin added another double-digit kill match to her resume, her 10th of the season and fifth in a row, as she found the hardwood 17 times against the Mean Green. Austin was hitting at an impressive .433 clip.

“We created some hitting errors against North Texas and they have one of the highest hitting percentages in the NCAA,” Watts said. “We have to handle the digs a little bit better to get our setter in the right position. They were a hot team coming in and we held our own against a solid squad.”

North Texas got out to a 4-0 lead in set one before Austin made her presence known with her first kill of the match. The Miners would climb out of the deficit to tie the set at 13 behind three Austin kills, a Maddie Morgan kill, and a 3-0 run from kills by Cheyenne Jones, Yost and Arellano. A bad set by the Mean Green’s Karley York would put the Miners up by one and prompt a North Texas timeout.

The Mean Green came out to a 3-0 burst out of the timeout, before Arellano stopped the run with her third kill of the set and Jones served up an ace to bring the Miners within one, 18-17, of North Texas. The two teams exchanged points before the Miners got back to back points from another Austin kill and King’s service ace to tie the set at 23.

A Miner set error would bring set point, but Austin spoiled it with a kill to even the score at 24. Both teams would exchange service errors, but a block assist by Yost and Jones gave the Miners the 26-25 edge.

North Texas would respond with two consecutive kills to bring up their set point, but Jones forced more extra points when her hit found the hardwood and Yost stopped an attack with her first solo block. Another UTEP service error tied the set at 28, but the Miners were able to close out the set after Arellano recorded another kill and the Mean Green’s attack went out of bounds for the 30-28 victory.

The Mean Green bounced back to dominate set two with a 25-12 win, but the Miners stayed competitive, tying with North Texas 10 times in set three before the Mean Green began to pull away at 20-17. King would surprise the North Texas defense with a setter’s dump to bring her team within two, but back-to-back North Texas kills gave them the 22-18 advantage.

Yost’s kill gave the Miners momentum and forced a timeout by the visitors, and the Mean Green’s kill by Alexis Wright was met immediately after with her teammate’s service error. Austin’s kill helped bring the score to 23-21, but it was the last UTEP point as the Mean Green put the set away at 25-21.

Propelled by nine kills, four of which came from Austin’s swing, the Miners were able comeback from a 10-6 hole to get within one of North Texas, 15-14. Yost was able to notch another kill off a King assist and Ashley Grzebeniak matched a North Texas kill to stay within one at 17-16. Jones and Kylie Baumgartner teamed up for a huge block assist to tie the set at 17.

North Texas was able to pull to a 22-19 lead, but two consecutive attack errors again brought the Miners within one. UTEP would see two more points off of kills from Yost and Austin, but the Mean Green ran away with the 25-23 set four win, and the 3-1 match victory.

“I feel like we were almost content with the first set and took our foot off the gas pedal, which let them get back into the game,” King said. “We fought back for the rest of the game, not giving them anything easy for the remainder of the game. There were a couple plays which we couldn’t capitalize on which made the difference in this game and if we can get those plays to go our way, we can put ourselves in position to win.”

The Miners will return to action on Sunday against UTSA. First serve against the Roadrunners is slated for noon at Memorial Gym, fans who wear pink will gain free admission.