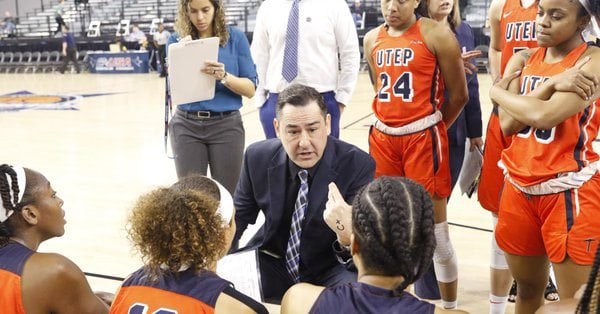 FRISCO, Tx- Tamara Seda posted a huge double-double (19 points, 14 rebounds) to pace a quintet of Miners in double figures as ninth-seeded UTEP outlasted eighth-seeded Southern Miss, 72-67, in the opening round of the 2018 Conference USA Championships at the Star Wednesday morning.

The Miners (17-13), who became the first ninth seed to win at the league’s pinnacle event since 2012, advance to lock up with top-seed and regular-season champion UAB (24-5) in the quarterfinals at 10 a.m. MST/11 a.m. CST Thursday while the Lady Eagles (15-15) conclude their campaign.

It was a back-and-forth contest with five ties and 11 lead changes. The Miners showed their mettle by surviving a 22-3 USM run in the third quarter that turned an 11-point lead (41-30) into an eight-point deficit (52-44) with 2:13 left in the frame. UTEP struck back with a 20-6 surge wrapped around the quarter break to regain the lead (64-58) for good, icing the contest at the free-throw line late.

“Well first of all my hat is off to Southern Miss,” UTEP head coach Kevin Baker said. “They have beat some really good teams this season. We were fortunate to come out on the winning side. I’m really proud and impressed with our team today. They’re just really good kids playing some really good basketball right now. I like the way our team is playing right now.”

Southern Miss was led by 23 points and eight assists from Shonte Hailes while Jayla King came off the bench to add 12 points.
The two sides went back-and-forth over the first several minutes before UTEP managed to go ahead by four (10-6) with 2:59 to play in the opening frame.

Southern Miss then ripped off nine straight points to surge out by five (15-10) with 1:09 left in the quarter. Three UTEP turnovers helped fuel the sequence, but the Miners regained their composure with back-to-back scores to cut the deficit to one (15-14) through 10 minutes of action.

A Southern Miss lay-up put it up by three (17-14) but Cook countered by nailing one of her three first-half triples to pull her squad even two minutes into the frame. Seda followed with a lay-up to complete a mini 5-0 push. The Lady Eagles answered with consecutive triples to vault back ahead by four. It remained a four-point differential (25-21) with 3:36 to play in the period but UTEP went to work. The Miners closed the half with a 10-2 run to carry a four-point advantage (31-27) into the locker room.

UTEP continued the surge to start the third quarter, peeling off seven consecutive points to wrap a 17-2 run around halftime. Katarina Zec started it off with a baseline jumper, which was followed by a pair Seda free throws. Cook then capped the sequence by knocking down another 3-point run. The two sides traded triples on the next possession, allowing UTEP to lead by 11 (41-30) with 7:42 left in the quarter.

USM regrouped and responded with a seemingly the demoralizing 22-3 run, including 16 straight, to flip the script. But UTEP didn’t break, instead peeling off eight consecutive points to pull even. Hailes hit a pair of free throws with one second left in the quarter to make it 54-52 through three quarters of action.

Both sides came out firing at the onset of the fourth quarter, with four lead changes over the first 90 seconds of the period. With the outcome of the game hanging in the balance, UTEP scored the next seven points to complete the aforementioned 20-6 push. USM was able to get the margin down to two (64-62). Howell calmly sank two free throws to put the Miners up four (66-62) with 54 seconds left, and USM was unable to get any closer from that point.

The match-up against UAB will be broadcast locally in El Paso on 600 ESPN El Paso with Steve Kaplowitz and Traci Miller on the call. It will also be streamed live on Facebook.