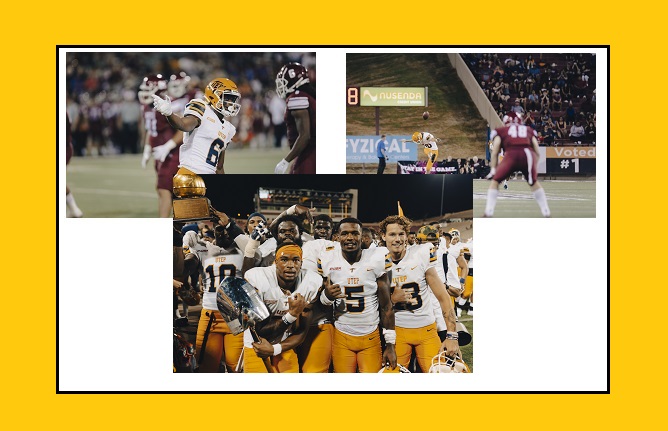 A trio of Miners swept the Conference USA Player of the Week honors presented by Surf & Turf Golf, with Jacob Cowing, Dy’vonne Inyang and Gavin Baechle being rewarded for their efforts in UTEP’s dominant 30-3 win over NM State in Las Cruces.

Cowing picked up right where he left off in 2020, recording a career-high 158 receiving yards on just five receptions and a 59-yard touchdown catch on Saturday.

The 158 yards receiving marked Cowing’s sixth 100-yard game of his career as the Miners started the 2021 season on the right foot. Cowing solidified himself as a deep threat for the Miners, making receptions of 72 yards and 59 yards in the win over the Aggies. The 59-yard touchdown on the opening drive of the second half was the seventh touchdown reception of Cowing’s young career.

Inyang led the Miner defense with six total tackles, including four solo stops, as the Miners snapped a three-game losing streak against the Aggies in the Battle of I-10 rivalry. The six tackles for Inyang tied a career-high mark for the veteran safety, who last tallied six tackles in UTEP’s game at Charlotte in 2020.

Baechle accounted for 12 of UTEP’s 30 points scored after finishing a perfect 3-for-3 on field goals and connected on all three of his PAT attempts in the win over New Mexico State. The 12 points and three field goals by Baechle tied his career-high marks as a Miner, both of which were previously set in UTEP’s win over Houston Baptist to open the 2019 campaign.

Baechle connected on field goals from 35, 27 and 33 yards out. McKinney, Texas, native also handled kickoff duties for the Miners with six kickoffs for 360 yards (60.0 avg.) with five touchbacks.

UTEP’s home opener versus Bethune-Cookman is scheduled for Saturday, Sept. 4 at the Sun Bowl and will kick off at 7 p.m. MT.