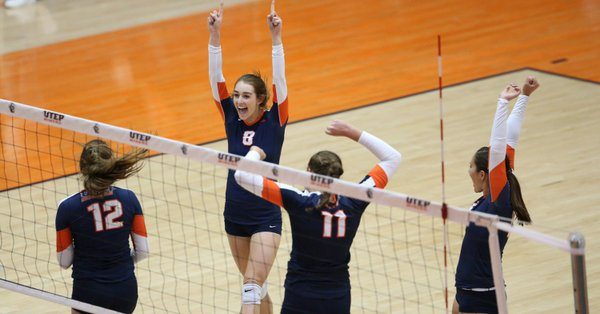 In front of more than 200 fans, a loud UTEP band and cheerleaders, the UTEP Volleyball Team routed the Middle Tennessee Blue Raiders in three sets on Sunday at Memorial Gym.

The Miners did not allow the Blue Raiders to reach 20 points in any set, taking the match 25-19, 25-16 and 25-14 on Senior Day for UTEP upperclassmen Amanda King and Dania Orozco. The win improved the Miners to 2-9 in Conference USA, 5-19 overall, while the Blue Raiders fell to 2-9 in league play and 7-19 overall.

“This was an exciting atmosphere for our Senior Day,” head coach Holly Watts said. “The crowd was really into the game and having the band come out and support us the way they did gave our team some extra motivation. We’d love to have more of this support to close out the season and to carry over into next year. Having this kind of support is what makes UTEP so special.”

Rookie Mallory Yost and sophomore Macey Austin paced the UTEP offensive with nine kills each. Yost was hitting at a blistering .500 clip, while Austin, who was held to single-digit kills for the first time since Sept. 19, was hitting at a .400 percentage. Cheyenne Jones also put in work for the offense, notching seven kills at a .500 clip. Senior Amanda King showed out in one of her second to last game in Memorial Gym, dishing out 32 assists to set up the offense.

Defensively, Ashley Grzebeniak led the team with nine digs, while Briana Arellano added eight of her own. Kylie Baumgartner was a force at the net, notching the team’s lone solo block while also teaming up for four block assists to stop the Blue Raider offense and keep them at a .080 hitting percentage.

“We put things together well, no matter what the other team was doing,” Watts said. “They tried to change things up on us and we were able to handle it well. Our middles produced well this weekend with blocking and offensively. The team played really consistent all three sets, we kept the pressure up on the other team the entire game.”

The Miners and Blue Raiders were evenly matched in set one before a 4-0 run by UTEP, including a kill each from Yost and Jones, put the Miners up 13-10. Middle Tennessee would earn three more points off of kills, but Grzebeniak would find the hardwood and Baumgartner and King teamed up for a block to keep the Miners ahead 18-13.

The Blue Raiders’ Dora Peonia would notch a kill to stop the run, but Arellano responded with one of her own and, after a bad set by the visiting Maddie Sweeney, the Miners stayed up 20-14. Austin mirrored another Blue Raider kill, and Yost put on a show with another block assist followed by a kill to keep the momentum in UTEP’s favor.

Consecutive points off of kills would bring the Blue Raiders to 18 points in the set, but Austin hammered another kill to bring set point for her team. Middle Tennessee’s Makila York would stop set point with a kill, but Sloan Sullivan’s serve would go out of bounds to end the set 25-19 and give the Miners a 1-0 advantage in the match.

Riding on a set one win high, the Miners allowed the Blue Raiders seven points to their nine before Jones’ kill began a 8-0 run. During that run, Baumgartner recorded two kills while also contributing a block assist, while King fed Arellano twice for consecutive kills. The other three points came from Middle Tennessee attack errors.

Grzebeniak’s next serve went into the net, but the Miners had the 18-8 lead to their benefit. Middle Tennessee would go on a short spurt of three points before the teams began exchanging points, but a 4-0 run by the Miners, which saw kills from Austin and Jones, put the Blue Raiders away 25-16.

Looking for their second sweep of the season, the Miners hit at a match-best .379 clip as a team for 13 kills with Yost, Austin and Jones each contributing three, while also recording eight block assists to close out the match. The set was tied at three before Yost notched her first kill of the set, then turned around to block the Blue Raider attack with Arellano, Cebak served up an ace, and Arellano hammered down a kill to go up 6-3.

Maddie Sweeney’s kill would stop the UTEP run, but Arellano quickly reinstated it with a kill and Jones followed suit. Baumgartner would earn her solo block, and the Miners saw a block assist from Arellano and Jones, coupled with multiple Blue Raider errors, to go up 13-4.

The Miners kept a cushion of no less than seven points during the match, before ballooning their lead to 21-10. Middle Tennessee would only earn two more points, with the other two coming from Miner errors, while UTEP saw another kill from Jones and two block assists from Jones and Baumgartner and Arellano and Baumgartner to end the set at 25-14 and the match 3-0.

“We really came together as team and played to our full potential,” Orozco said. “We still have three more games left so we need to stay focused and carry this momentum into our next matches.”

The Miners will look to keep their run going on the road when they face FIU and Florida Atlantic Nov. 3-5.

“I was excited for senior day and I just wanted to enjoy the moment. The season isn’t over yet and we go back to my hometown for our last conference road trip which will be special for me,” Flordia native Amanda King said. “Going into the next two games we’re confident knowing that we can win and close out the season on a good note.”