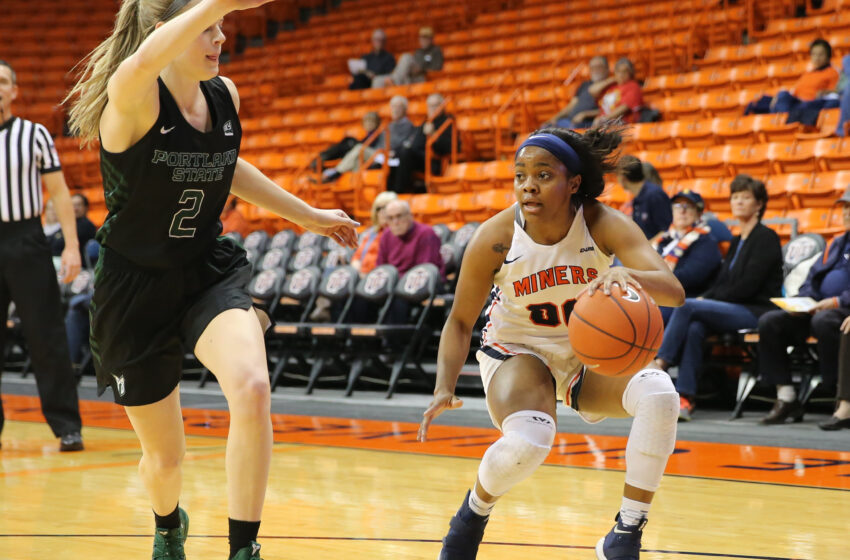 The UTEP women’s basketball team (2-7) faces a tall test by playing at streaking Arizona (8-1) at 6:30 p.m. MT Monday. Both teams are well rested, having last played on December 9.

UTEP head coach Kevin Baker says, “Arizona will be a great test for us. Not only will the game be a tough road match up, Arizona is also having a great year. I am looking forward to watching our team compete against a PAC 12 opponent.”

The Miners enter the contest on seven-game skid, including falling last time out at home to Portland State 89-61. UTEP is 0-2 on the road in 2018-19. The Wildcats are flying high, riding their longest winning streak (seven) since the 2003-04 season.

UA is 4-1 at home. It marks the third straight contest for the Miners against a foe which enters with one or fewer losses.

Arizona leads the all-time series with UTEP, 10-4, including 4-2 when playing in Tucson. The series dates back to the Miners’ first season (1974-75) as a program. Eleven of the match-ups occurred between 1974-75 through the 1987-88 seasons, including four contests when both schools were members of the Intermountain Athletic Conference.

That win snapped a seven-game skid for the Orange and Blue against the Wildcats.

Arizona is off to its best start (8-1) since the 2011-12 season, and has already surpassed its win total from last year (6-24). The Wildcats are riding their longest winning streak (seven) since the 2003-04 season, and have won three games by at least 40 points for the first time in a single season in program history. UA has a +27.0 margin of victory on the year, which is third in the Pacific 12 and sixth nationally.

Individually Washington transfer Aari McDonald is the nation’s second-leading scorer at 25.7 points per game. She is second in the country for free throws made (62) and fifth in attempts (76) while ranking 15th in the NCAA for both field goals made (74) and attempted (160).

McDonald is also 99th nationally in steals per game (2.3) Cate Reese is one of five freshmen in the country to average a double-double (14.7 ppg, 10.1 rpg). Reese places 39th nationally for rebounding and 36th in double-doubles (three). Seven of Arizona’s eight wins have been by 20 or more points, including stomping Long Beach State on the road, 70-43, last time out on Dec. 9.

UTEP put together a 17-0 run that was wrapped around halftime and never let Pacific-12 member Arizona back into the game on the way to posting a 64-53 victory at the Junkanoo Jam on Nov. 23, 2012. The surge spanned 10:46, including the first two minutes of the second half.

When it concluded, the Miners led 30-17 with 18:13 to play and the Wildcats never got closer than seven (60-53, 44 seconds left) the rest of the way out. Anete Steinberga paced a quartet of Miners in double figures with 18 points. Kayla Thornton (10 points, 10 rebounds) and Chrishauna Parker (10 points, 11 rebounds) each had double-doubles and Kelli Willingham added 11 points for UTEP The Miners kept UA to 31 percent shooting while also forcing 25 turnovers.
UTEP finished at 42.9 percent (24-of-56), aided by a crisp 54.5 percent (12-of-25) in the second stanza.

Redshirt-junior Ariona Gill posted her first career double-double (17 points, career-best 12 rebounds) but an off shooting day and a balanced offensive attack from the visitors proved problematic in UTEP’s 89-61 loss to undefeated Portland State at the Don Haskins Center on Dec. 9.

Jade Rochelle (career-high 11 points) and Ariana Taylor (career-high 10 points) came off the bench to provide a spark for the Miners, who played the second half without leading scorer and rebound Zuzanna Puc. Jordan Alexander added eight points and eight boards, but the Vikings simply had too much firepower.

The Vikings also had significant advantages in points in the paint (42-28) and fastbreak points (24-21). UTEP shared the ball effectively, recording 15 assists on 20 made field goals.

The game will be broadcast locally on 600 ESPN El Paso with Duke Keith flying solo on the call. There will also be a live stream on Arizona Live Stream.