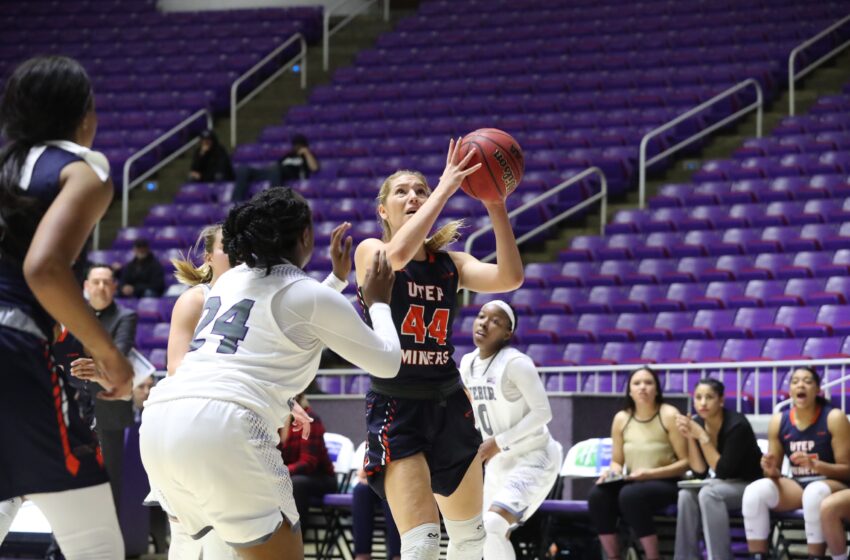 The Miners (2-4) were sluggish at the onset, with the Wildcats (3-3) capitalizing in the form of a 15-0 run over the first five minutes of the game. UTEP went to work from the point on, getting the deficit all the way down to two (43-41, 4:07 3Q) midway through the third quarter. WSU responded five a 5-0 run and the Miners couldn’t get closer than five the rest of the way.

“It’s the same story we’ve had the past four games. We just dug ourselves too big of a hole to climb out of,” UTEP head coach Kevin Baker said. “We just didn’t shoot the ball well, particularly early. When you’re down that much, every little bitty thing you do wrong is magnified by 10. There were some bright points, but bottom line we’ve just got to play better.”

UTEP piled up 15 assists on 22 made field goals, while tying for the fifth-fewest turnovers (six) in program history. The boards (42-41, WSU) were competitive as well but the home side found some separation with its shooting. WSU nailed 44.2 percent (23-52) from the field, including drilling 10-21 (47.6 percent) from 3-point range. Conversely, the Miners finished at 29.7 percent (22-74) from the floor. UTEP hit a season-best nine triples but needed a campaign-high 33 attempts to do so.

Zec drilled a quartet of triples while Alexander connected on 3-6 from beyond-the-arc. Jade Rochelle came off the bench to contribute career bests in both points (eight) and rebounds (eight), while Alexa Hoy added nine. Ariona Gill chipped in six points and career-high six boards.

WSU was led by a near triple double from Jaiamoni Welch-Coleman, who finished with 16 points, nine rebounds and nine assists. She was buoyed by Emily Drake (18 points, six boards).

The Orange and Blue were hindered with the aforementioned 15-0 run. The Miners got on the board with a lay-up by Rochelle, followed by a driving score from Gill. The teams traded baskets the remainder of the frame, with the Wildcats armed with a 22-10 advantage through 10 minutes of action.

WSU tallied the first five points of the second quarter to grab its largest lead of the contest at 17 (27-10, 8:54 2Q). The margin was 15 (30-15, 6:14 2Q) before Zec started to heat up. She banged home triples on consecutive possessions to bring the Miners within single digits (31-20, 5:33 2Q) and force a Wildcat timeout. It paid dividends in the form of a trey, one of seven in the half for WSU. This time Alexander answered with her own 3-pointer, but the Wildcats were able to carry a 12-point cushion (36-24) into the locker room.

Zuzanna Puc converted on a reverse lay-up on UTEP’s opening possession of the second half. After the Miners got a stop, Alexander nailed another triple to bring UTEP within seven (37-29). WSU was able to push the differential back to 10 (41-31) before UTEP ripped off seven consecutive points in the blink of an eye to get right back into the game. A lay-up ended the surge, but Zec was pure from distance on the next possession to bring the Miners within two (43-41). The home side had an answer, however, and UTEP’s comeback bid would fall short.