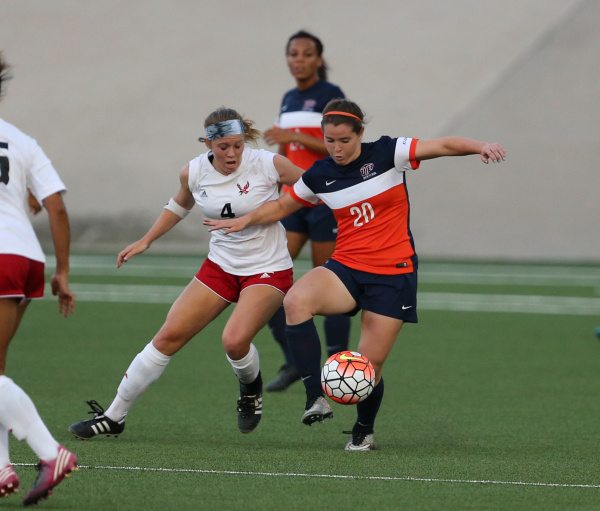 Bri Barreiro scored and freshman goalkeeper Alyssa Palaciosregistered 10 saves but visiting Eastern Washington came away with a 2-1 victory in the 2015 season opener for both squads at a packed University Field Friday evening.  The Miners (0-1-0) got on the board first when Aleah Davis’s cross found Barreiro, who one-timed home the chance to ignite the capacity crowd at 23:09 of the first half.

To their credit, the Eagles (1-0-0) found the equalizer 10 minutes later. A thru ball by Delaney Romero afforded Chloe Williams a breakaway, and she was able to tuck the ball away at 33:24. The second goal by the visitors came with less than nine minutes remaining in regulation, with an outstanding individual effort from Devan Talley allowing her to best Palacios at 81:06.

Shots were 20-11 in favor of EWU, including 10-6 in shots on goal, while the Eagles took eight corners to the Miners’ six. All four offside calls in the contest went against the Orange and Blue.

“We know we can play better than that,” UTEP head coach Kevin Cross said. “It looked like we had a lot of nerves out there but there’s no excuses for that. We give Eastern Washington credit. This was a hard environment to come into and play in, and they did that.”

The first shot of the contest came in the 11th minute, with a try by Talley. Palacios tracked it well and gobbled it up for her first career stop. UTEP was on the offensive in the 16th minute with Davis ripping a chance that was corralled by the Eagles’ GK Mallory taylor.

Two minutes later UTEP secured a corner, but couldn’t get a shot on target. That proved to be a moot point in the 23rd minute when Davis and Barreiro teamed up for the season’s first goal.

After EWU got on the board, neither team had a serious threat the remainder of the stanza. The two sides went back-and-forth in the second half, but each goalkeeper did their part to keep the game tied at one.

With the possibility of overtime looming, the Eagles turned to Talley. She managed to get some open space before putting away a low, hard shot.

UTEP did well to regroup after conceding the go-ahead-goal. It earned a corner down the stretch, with Nicole Lindsayserving a good ball into the area. Eventually it found the foot of sophomore Margaret Hadley, who ripped a rocket on frame. Unfortunately the blast went directly at Taylor, who bobbled it momentarily before corralling it to close out the contest.

The Orange and Blue will return to action at home against Abilene Christian at 1 p.m. Sunday. As part of “Faith and Family Day” for fans will have a chance to get a pre-game donut courtesy of Krispy Kreme while supplies last.