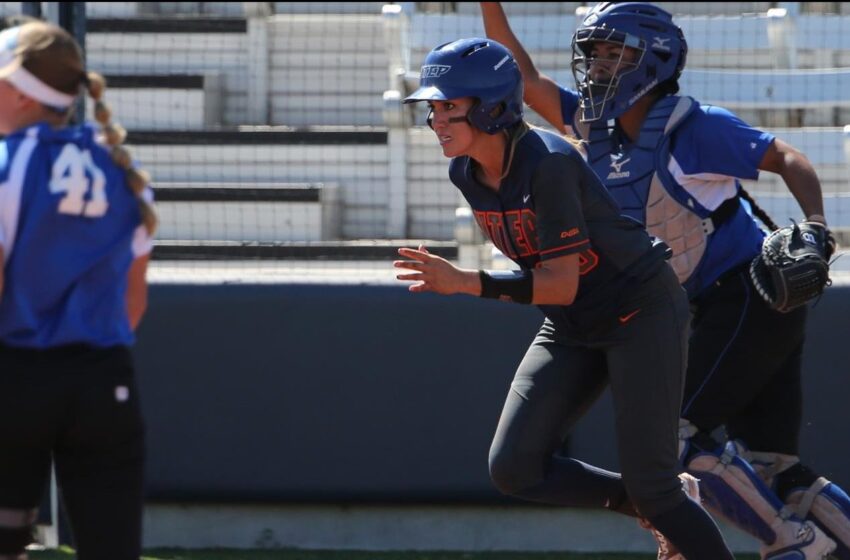 LAS VEGAS, Nv. – When South Dakota poured on four runs in the first inning and another during the third to take an early 5-0 lead on a UTEP, the ‘never say die’ Miners – bolstered by confidence gained in their previous two wins – came roaring back .

The Miners (4-6) pounded out six hits and crossed the dish six times in the third inning on their way to a 7-5 victory over the Coyotes (1-10) on a windy and chilly Sunday afternoon at SLC Park.

The victory is also the Miners’ third in a row, the most since winning three consecutive against North Texas in 2016.

“[The team] just kept plugging away,” fifth-year UTEP head coach Tobin Echo-Hawk said. “I think with yesterday’s big wins, it gave the team confidence. I didn’t see them panic at all and they have this look of trust in their eyes no matter what was going to happen – we were going to win that game. You just have to love it when a team gets to that point.”

Starting South Dakota pitcher Dustie Durham cruised during the first two innings, allowing only one hit – an Ariel Blair bunt single during the first frame. Blair would advance to second on an errand throw by the pitcher, but Durham kept the UTEP bats in check.

In the top third, after a pair of wild pitches, Taylor Steinfeldt, who reached base on a walk, scored a run on a Durham groundout to second base, giving the Coyotes a 5-0 lead.

The Miners’ bats then came alive during the bottom half.

Freshman Ilena Santos got the hit parade started and sparked her teammates when she drove a 1-1 pitch into blustery wind conditions over left center to put the Miners on the board. It was Santos’s second dinger of the season. Fellow freshman Ariana Valles followed with a shallow double to center as the high winds kept the ball in the air, making it difficult for the shortstop and center fielder to make the out. Blair connected on her second bunt single of the day to put runners at the corners for the Miners, while following with a stolen base to set up Kaitlin Ryder. The senior took a 1-2 pitch and sent to left that plated Valles and Blair, making the score 5-3.

The inning continued as Courtney Clayton reached on an error by the shortstop and Smith bunted to load the bases. Pinch-hitter Bryanna Molina reached on a fielder’s choice as Ryder was thrown out at home. But Pamala Baber singled on an infield hit to shallow third, scoring Clayton to make the contest a one-run edge.

The Miners batted around the order as Santos, who led the inning with her solo shot, put the ball into play and reached when the shortstop committed her second error of the inning. UTEP capitalized on the miscue as Baber and Molina scored to give their squad a 6-5 advantage.

Relief pitcher Julia Wright took over from there. The junior transfer gave the Miners 4.0 fantastic innings. Wright struck out six Coyotes with zero walks allowed. Wright earned the save, the first of her UTEP career. Junior transfer Kira McKechnie, who came into relief for starter Devyn Cretz, threw 2.0 frames, allowed only one hit and struck out two. McKechnie (2-2) earned the victory, her second of her collegiate career.

The Miners put an insurance run on the scoresheet during the sixth on a Ryder RBI single that plated Valles, who singled to right with one out.

Wright then forced a fly out to right (Baber), struck out a batter looking and an unassisted out by first baseman Taylor Sargent to put the contest in the books.

UTEP amassed 11 more hits, its third consecutive double-digit hit game. Ryder finished 2-for-4 with three RBI, Blair went 2-for-4 with a run scored, Smith registered a 2-for-3 outing and Valles produced a pair of hits on a trio of at bats with a pair of runs scored.

“We’re hitting the ball well and putting it into play,” Echo-Hawk said. “It’s like I said last night, if you put the ball into play, it puts pressure on the defense. We also got those timely hits during the last three games. But we need to continue to work, but I couldn’t be prouder of this group of ladies.”

The Miners finished the weekend 3-2, the first winning weekend in Las Vegas, Nev., since the 2008 season.

And the Miners did just that Saturday and Sunday.