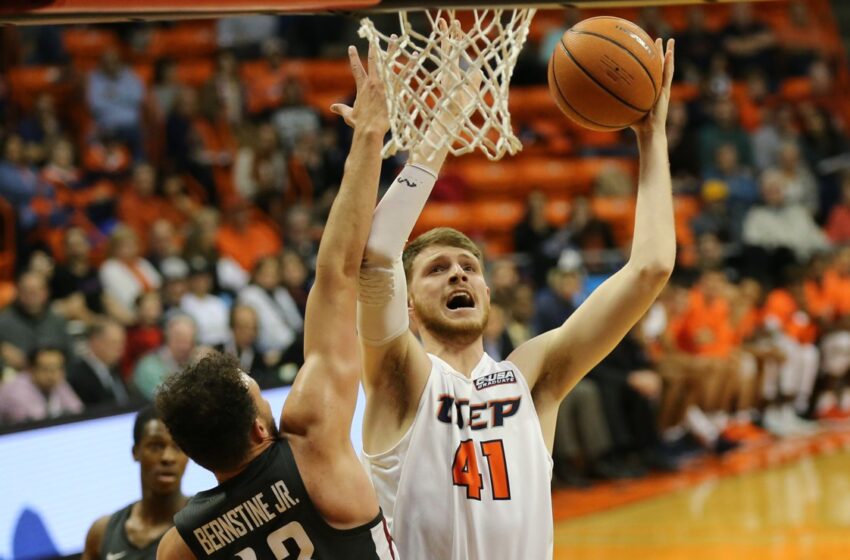 For the first 20 minutes on Saturday night, Washington State pounded UTEP on the glass, made seven three-pointers and built a three-point halftime lead.

In the second half the Miners turned the tables on the Cougars, owning the boards 21-12 and holding them to 5-for-16 shooting from beyond the arc.  It all added up to a 37-27 UTEP advantage in the second stanza and a 76-69 victory before 6,341 enthusiastic fans in the Don Haskins Center.
It was a quality win for the Miners (3-6), who appear to be rounding into form following a sluggish start to the season.
“You think about [Washington State’s] season so far up to this point, beating Saint Mary’s and San Diego State, they are really difficult to guard because they have so many three-point shooters on the floor at all times,” UTEP Interim Coach Phil Johnson said.  “A lot of times five, and most of the night four.  They just lit us up in the first half and we couldn’t rebound it, we couldn’t stop them.  And everything changed in the second half.  We guarded better.”
UTEP opened the second half with a 10-3 run to go ahead 49-45.  The game was tied up for the last time at 55-all when the Cougars’ Milan Acquaah scored a jumper with 11:30 to play.  The Miners took the lead for good, 57-55, on a rebound and tip-in by Matt Willms with 10:53 remaining.
Washington State (6-3) hung around and only trailed by one (66-65) after Kwinton Hinson sank a three-pointer with 3:43 left.  The Miners buckled down and held the Cougars to only four points the rest of the way, as they salted it away at the line.  UTEP finished 14-for-14 from the charity stripe in the second half and 21-for-22 for the game.  The .955 percentage is second-best in school history for a game with a minimum 20 free throws made.  The Miners shot 96.3 percent (26-for-27) from the stripe versus Fresno State on Feb. 10, 2005.
Keith Frazier led the Miners with 21 points and eight rebounds.  He shot 5-for-11 from beyond the arc.
“We’ve got to make Keith a complete player,” Johnson said.  “We obviously know he can shoot it and score.  He’s learning.  He’s getting better defensively and just passing and understanding the score and time and all those things.  We gave him player of the game, not just because of his scoring, but you look at the stats and he’s our leading rebounder.  For him to do that as a 6-4 two-guard was huge.”
Omega Harris scored 18 points.  He and Evan Gilyard (10 points) both went 8-for-8 from the line.  Paul Thomas added 11 points and five rebounds.  Willms, making his return from a broken hand after missing three weeks and four games, tallied eight points and seven rebounds and was a big factor on the glass in the second half.
“Evan Gilyard, I don’t even know if he had a basket,” Johnson said.  “He made some free throws.  He had one basket and he was 0-for-4 from three.  But the job that he did on [Malachi] Flynn was tremendous.  I thought Jake Flaggert‘s job … Jake doesn’t score.  I told our guys, you don’t have to score to impact winning.  And there’s proof with Evan Gilyard and Jake.  But obviously we got some good offense from Keith and Omega again.  I’m glad to see Omega play well.  And having Matt back was tremendous down the stretch going and rebounding it.”
Flynn, averaging 16.8 points entering the game, finished with three.  He was 1-for-8 from the field and 1-for-6 from outside.  Viont’e Daniels led Washington State with 18 points and six three-pointers.
It was an entertaining, well-paced game on “Star Wars Night” with a crowd that was at its best.
“I want to thank everybody that came out given the circumstances, which are unique and I get that,” Johnson said.  “But to come out and support these kids and the team, I’ve always made it clear it’s not about me whatsoever.  Not at all.  It’s about these players and team and just trying to have a year and get better.  And they’re enjoying themselves right now.  But the crowd helped us.  I mean, when they went crazy for a defensive play by Flaggert to take a charge and get on the floor for a loose ball, it’s the most knowledgeable crowd in the country.  And I thought it gave us a big, big lift in the last five minutes.”
The Miners will take a 10-day break between games during finals week before hosting Incarnate Word on Tuesday, Dec. 19 at 7 p.m.
UTEP 76, Washington State 69 (Final Game Book)
Tags: miners utep utep basketball utep miners