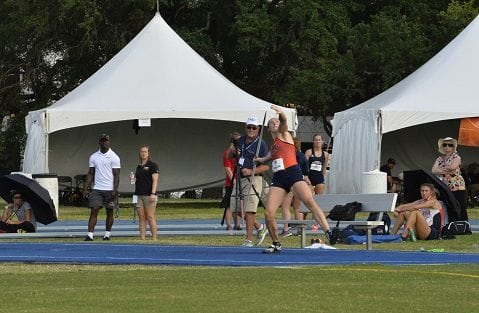 HOUTSTON – Senior Lucia Mokrasova finally captured the elusive gold medal in the heptathlon by scoring 5,523 total points at the 2018 Conference USA Outdoor Championships on Friday at the Wendel D. Holloway Field in Houston.

Mokrasova is a three-time indoor pentathlon champion with two second-place finishes in the heptathlon, making this her first career gold medal in the event.

The senior secured 10 team points for the Miners, putting them tied for third place through three events.

Together the trio distance runners tallied a total of 17 points for the men’s team, putting them second in the team standings.

The Miners return to track for day three on Saturday with the field events starting at 2 p.m. MT and the running events at 4:30 p.m.

The spotlight will be on sophomore Michael Saruni when he will compete in the 800m and 1,500m on Saturday along with teammate Jonah Koech. Saruni garnered national and world-wide attention when he broke the 800m NCAA Record at the Desert Heat Classic with a time of 1:43.25. Donavan Brazier (Texas A&M, 1:43.55) previously held the record which stood for two years.