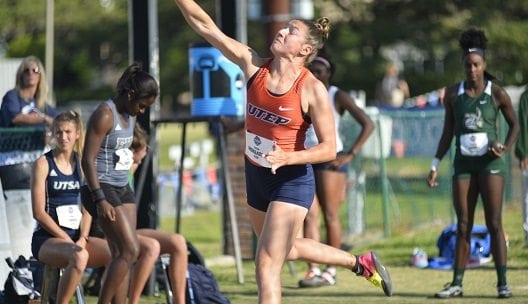 HOUSTON – UTEP senior Lucia Mokrasova left nothing to chance as she started her final heptathlon competition scoring 3,364 points leading the field of 15 athletes at the 2018 Conference USA Outdoor Championships on Thursday in Houston.

“She had a good day to open the competition,” UTEP head coach Mika Laaksonen said. “She really focused on her events and she could have a chance at national depending on how tomorrow goes.”

Mokrasova started the day clocking the fastest time in the 100m hurdles crossing the finish line at 14.42 and gaining 920 points. She followed that performance with a third-place finish in the high jump, leaping over the bar at 1.66m (5-5.25) tallying 806 points.

Mokrasova established a 219-point lead over Middle Tennessee’s Qetuwrah Abdullah (3,145). She will return to the track on Friday at beginning with the long jump at 3:30 p.m. MT, followed by the javelin and 800m run.

Also competing on Friday will be newcomer Benjamin Coronado in the men’s hammer throw starting at 1:00 p.m. Coronado notched a personal-best 44.28m (145-3) at the UTEP Springtime.

Antony Kosgei, Cornelius Kapel and Boaz Ronoh will all compete in the 10,000m final at 7 p.m. Kosgei ranks fifth heading into the final with a season-best 30:20.92, while Ronoh and Kapel will compete in their first 10,000m race of the season.

The bulk of the Miners will compete on Saturday with field events beginning at 2 p.m. and running events at 4:30 p.m.