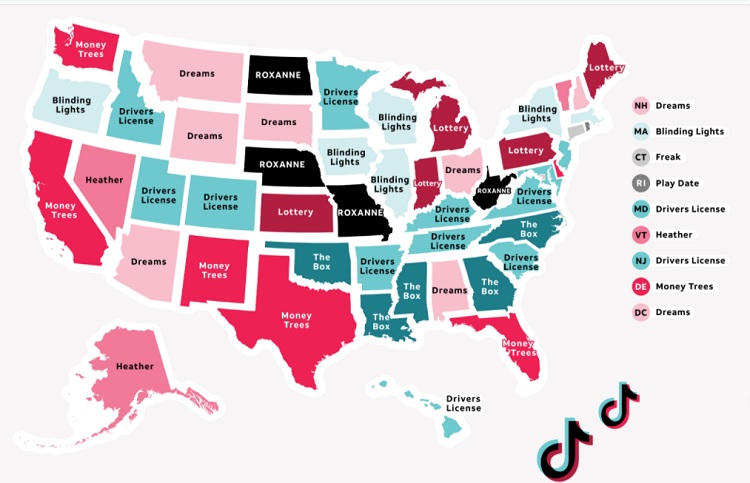 As the age of technology advances and a new generation seems to have grown into maturity overnight, TikTok has quickly taken the world by storm.

From turning new songs into instant classics to giving old chart-toppers new life, TikTok creates music trends. Researchers with AT&T Experts set out to determine what popular TikTok songs people are most interested in across the country.

“In addition to videos with sassy commentary and hilarious observations, the fledgling social media sensation is a championed outlet for creativity and self-expression,” researchers share. “But beyond clever quips, video stitching, and infectious dance moves, TikTok has proven a profoundly effective platform for circulating the work of musical artists and catapulting specific songs into viral popularity.”

As for the research, AT&T experts began by compiling a list of songs included in videos that reached at least 1 billion views on TikTok, as provided by Newsroom.

Additionally, researchers looked at TikTok’s playlist of the top songs and Spotify’s Viral playlist, then removed any duplicates. They also excluded songs that were audio clips, rather than full-fledged songs.

This left researchers with a grand total of 153 songs.

Overall, Olivia Rodrigo’s “Driver’s License” is the most sought after song; here in Texas, Kendrick Lamar’s “Money Trees” is the number one TikTok song.

According to Statista, American TikTok users average 489.09 minutes per month on the app. That translates into more than 8 hours each month spent on the platform.

To read the full report and the top 10 artists, click here.